The confirmed death toll of the boat accident on Chao Phraya River in Ayuthaya province of Thailand climbed to 29 on September 20 morning while three others are still missing, according to local authorities. 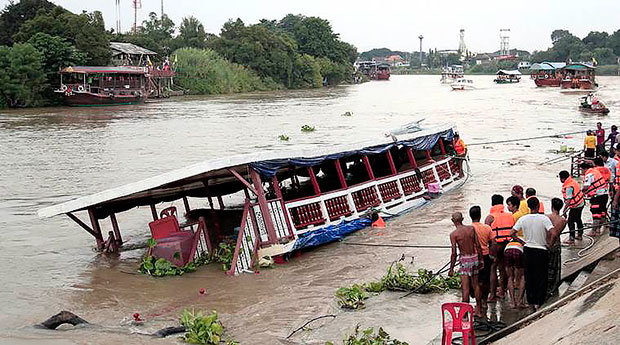 Local authorities planned to fish out the boat on September 20 for investigation.
(Photo: AP/VNA)

Local authorities planned to fish out the boat on September 20 for investigation.

The boat operator was arrested after he attempted to run away from the scene.

The incident happened at about 4pm (local time) on September 18.

The boat was reportedly carrying about 150 passengers, mostly Muslims, while it had been licensed to carry only 50.

The passengers were returning from Ayutthaya, about 90 km away from Bangkok, for an annual religious event to Nonthaburi province.

The boat was believed to hit a concrete pillar on the river near Sanam Chai Temple.

Poor water transport security standards are seen as a main reason for regular boat accidents in the kingdom./.

More forces accelerated to focus on giving treatment and…

The self-criticism conference held by the Party Committee…