A Thai traditional puppet show will be performed at the Hanoi Opera House tomorrow as one of the activities celebrating 45 years of ties between Việt Nam and Thailand.
The show called The Myth of Rahu and the Lunar Eclipse is a lively tale based on Thailand’s ancient belief that a lunar eclipse was caused by a demon who swallowed the moon.

The show is an impressive blend of puppetry and other traditional arts. The sheer elegance of the beautiful puppets is accentuated by a live orchestra, some khon (the masked play) and a little nang yai (form of shadow play). 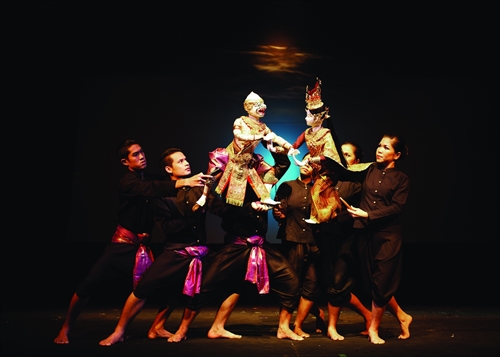 Artists of Joe Luis Theatre will perform The Myth of Rahu and the Lunar Eclipse show in Hà Nội on June 17. — File Photo

With recorded Thai traditional classical music playing in the background, the audience will be introduced to each of the characters. They are represented by beautiful hand-crafted light wood and paper marched puppets. The graceful movements of each puppet are controlled by three puppeteers.

Joe Luis Theatre which was established in 2000 is the first and the only theatre group to travel and present large shows abroad.

It creates diverse classical stage shows and musical performances, both traditional and contemporary.

It has continuously presented small puppet shows on various occasions, locally and internationally.

Joe Luis won the Best Traditional Performance award with The Myth of Rahu and the Lunar Eclipse at the 10th World Festival of Puppet Art in Prague in 2006.

A contest on revolutionary songs propaganda

The final day of Vietnamese Goods and Super Promotion in…