At 43.8 percent of the country’s adult population, general alcohol consumption rate of Vietnamese people is higher than some might expect. 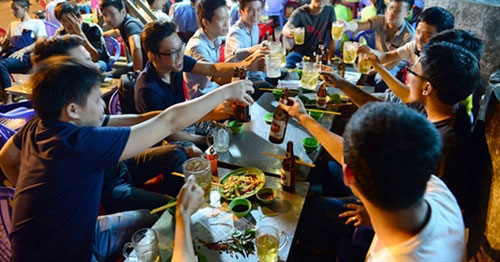 More than 77 percent of adult males and 11 percent of women said that they had consumed at least six units of alcohol in the past 30 days.

More than 44 percent of men and 1.2 percent of women said that they had engaged in heavy episodic drinking.

The figures on alcohol consumption were part of the latest survey on non-communicable disease (NCD) risk factors revealed on September 8 in Hanoi.

The survey found that the general smoking rate of Vietnamese aged 15 years and above was at 22.5 percent. The percentage of males who currently smoked tobacco was very high at 45.3 percent, while female smoking was at 1.1 percent.

WHO representative Nguyen Tuan Lam said Vietnam should put forward intervention measures against NCD with a focus on strengthening law and regulations on alcohol damage prevention.

The country should effectively implement measures following recommendations of the WHO, such as alcohol promotion and advertisement, set a time limit for selling and purchasing beer and wines, alcohol trading and tax policies.

Vietnam should also undertake measures to reduce the use of salt through education and communication programmes and integrate the programme on overweight and obesity prevention into the National Nutrition Programme, Lam added.

The survey was conducted by the Ministry of Health’s Preventive Medicine Department on nearly 3,800 people aged between 18 and 69 years in Vietnam in 2015.

Data is collected to help countries build and strengthen their surveillance capacity and develop appropriate strategy and intervention policies.

The Ministry of Health said that while the communicable disease rate was reducing, NCD rate increased to 71.6 percent in 2012, compared with 40 percent in 1986 and 60 percent in 2006.

Inspecting drugstores in the areas kicked off

3 districts are conducting a vaccination campaign against COVID-19

The field hospital no.1 was put into operation