Spokesperson asks for respect for Vietnam’s sovereignty in East Sea

Spokesperson for the Ministry of Foreign Affairs Le Hai Binh has asked parties involved in Truong Sa (Spratly) and Hoang Sa (Paracel) archipelagoes to respect Vietnam’s sovereignty in the area and act responsibly. 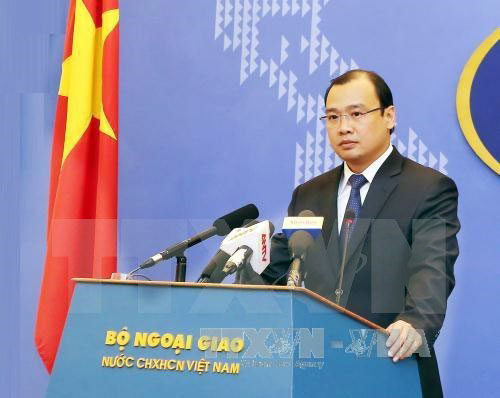 He made the statement regarding a query on Vietnam’s reaction regarding the information that China is completing big military works on illegal man-made islands in Vietnam’s Truong Sa archipelago during the ministry’s regular press conference in Hanoi on March 30.

Vietnamese functional agencies are verifying that information, Binh said, reiterating that Vietnam has full legal foundation and historical evidence to affirm its sovereignty over Truong Sa and Hoang Sa archipelagoes.

Parties concerned need to respect Vietnam’s sovereignty, act responsibly, and take no actions that complicate the situation as well as threaten peace, stability, and maritime security and safety in the East Sea, the spokesperson said./.

The online conference to instruct the execution of information and communication…