Vietnam basketball Saigon Heat team has defeated Singapore Slingers 88-71 to officially earn a ticket to compete in the playoffs of the ASEAN Basketball League (ABL) in the OCBC Arena. 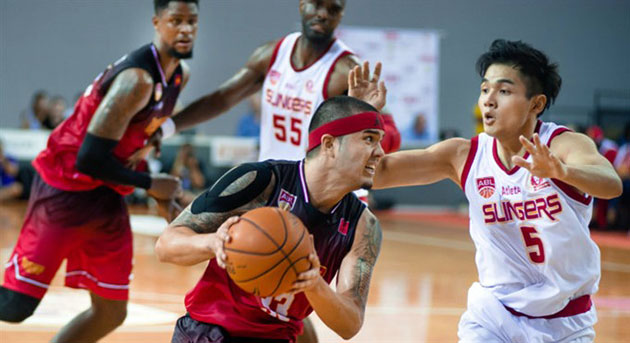 Saigon Heat team defeat Singapore Slingers 88-71 to officially earn a ticket to compete in the playoffs of the ASEAN Basketball League (ABL) in the OCBC Arena. (Source: ABL)

“I am very proud,” Heat head coach Tony Garbelotto said on the official tournament’s website. “We clinched it with two games to go.”

He also held his own against Singapore’s Howard, who had 22 points on 9/23 field goals.

However, Howard achieved personal milestones in the game. He surpassed 1,000 career rebounds in the ballgame, and leapfrogged Chris Charles in total overall points in ABL history. Howard is now third all time, with 1,361 points to his name.

“It was a huge victory,” Heat’s Moses Morgan said on the official tournament’s website. “We knew they were going to come out and play well, with or without world import Xavier Alexander. Their locals stepped up, they made the shots.”

“But we were able to pull away,” Morgan said proudly. “We got the ball inside to Henriquez and Lenny Daniel, and they did what they were supposed to do inside. As a collective team, it was big for us.”

The past two victories of Saigon Heat have come against a Hong Kong side without Josh Boone, and the Slingers sans Alexander.

But according to coach Garbelotto, the calibre of the teams they defeated, with or without imports, should not be understated.

“These are not the low-level teams,” Garbelotto said. “These are the top two teams who have history, very good structure and good coaching. These are not teams that are turning up to lie down. That’s why I knew it was not going to be easy.”

The Heat will celebrate their formal entry into the playoffs, but they know their work is not done, especially with two games remaining on their calendar./.