The National Institute of Haematology and Blood Transfusion (NIHBT) collected more than 9,300 units of blood from donors on February 18 in Hanoi. 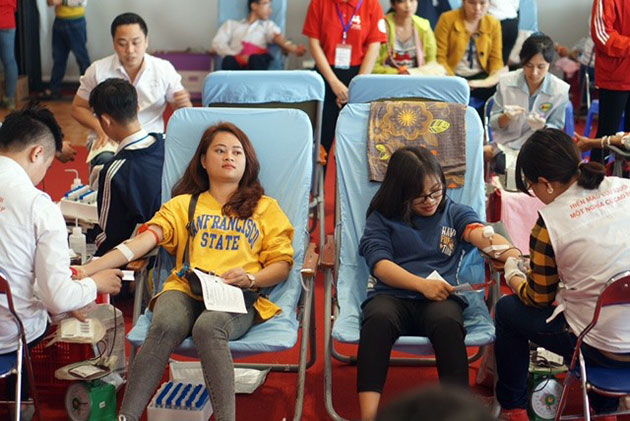 The donations have brought the total collected blood to more than 60,000 units, each containing 350ml, donated during ten festivals since 2008.

Speaking at the event, Deputy Minister of Health Nguyen Thanh Long highlighted the blood drive as an important milestone in the development of voluntary blood donation movement in Vietnam.

“The Xuan Hong festival is very different from the many cultural and sport activities in the country during the spring season.

It is the only festival where people come together to share feelings and their responsibilities to patients by donating blood to save lives,” said Long.

“The festival helped ease the situation of blood shortages during the Tet (Lunar New Year) period, saving the lives of thousands of patients over the past nine years,” said Long.

Long noted that the festivals changed the public’s knowledge and behaviour about blood donations, creating a new tradition of donating blood during the New Year period.

Praising contributions by blood donors, mainly the young and students, as well as the NIHBT’s programme over the past nine years, Long called upon the public and authorities to continue to regularly donate blood, not only at Xuan Hong, but also many other times during the year to save more patients who need blood transfusions.

“The festival model has been expanded throughout many provinces and cities nationwide, and no hospital reported blood shortages during the Tet period,” said Tri.

Nguyen Thi Thu Thuy, a Thalassemia patient, noted that she used to wait many days for blood transfusions at the NIHBT.

“The Xuan Hong festival has ended the situation of blood shortages. I now do not have to wait for blood anymore,” said Thuy.

The festival organisation board said more than 51,000 units of blood were collected during the nine Xuan Hong blood donation festivals.

According to the Ministry of Health’s statistics, the country collected more than 1.4 million units of blood in 2016, equivalent to 1.5 per cent of the country’s population donating blood.

The collected blood has met more than 60 per cent of the country’s emergencies, treatments and preventive demands.

Additionally, the health sector has set a goal to collect at least 1.7 million units of blood in 2017./.