Prime Minister Nguyen Xuan Phuc and a high-ranking delegation of Vietnam left Washington DC on late May 31 (local time), wrapping up an official visit to the US at the invitation of President Donald Trump. 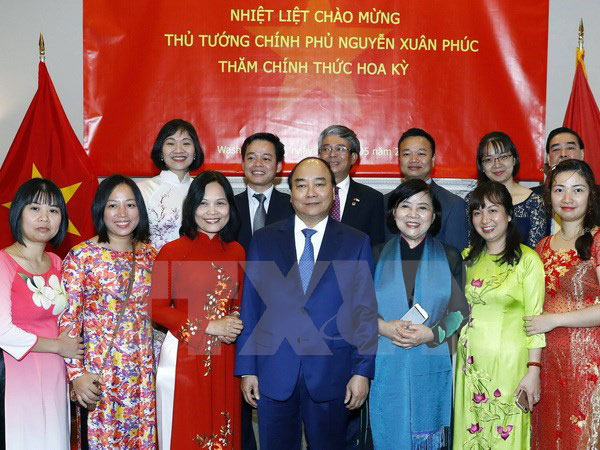 Prime Minister Nguyen Xuan Phuc (front, centre) and staff of the Vietnamese Embassy in the US pose for a photo (Photo: VNA)

Earlier, he visited the Vietnamese Embassy and agencies of Vietnam in the US on May 31 afternoon (local time).

The Embassy and other agencies of Vietnam in the US grasp the Party’s and State’s foreign policy and have exerted efforts to fulfill all assigned tasks, he noted.

He promised the embassy’s staff will work harder to contribute to Vietnam-US cooperation.

Commending the embassy and other agencies for contributing to his visit’s success, PM Phuc recognised the embassy’s performance, which has helped tighten the two countries’ ties.

As the US is home to the biggest number of Vietnamese expatriates, he asked the embassy to listen to them in order to suggest policies to the Government.

He also applauded the activities of other agencies in the US such as those of Vietnam News Agency, Vietnam Television, and the representative office of the Ministry of Science and Technology. He asked them to further reform their activities to help solidify the countries’ friendship./.