Prime Minister Nguyễn Xuân Phúc has sent a letter to congratulate the Vietnamese delegation to the Rio Games and shooter Hoàng Xuân Vinh in particular over the gold medal Vietnam has ever won after six decades of competing in the Olympics. 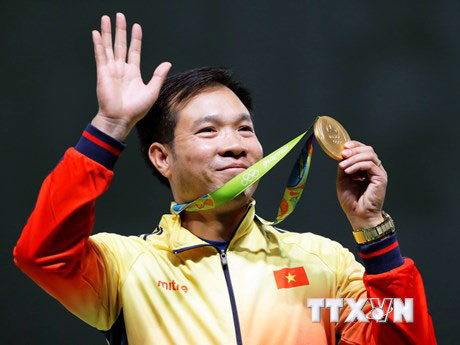 Vinh, who is a military officer, brought home the gold medal in the men’s 10m air pistol on August 6 in Rio de Janeiro.

He also broke the previous Olympic record in the event.

Prime Minister Nguyễn Xuân Phúc wrote in the letter that Vinh’s achievement brings honour to the country and pride for officials, coaches, athletes and Vietnamese fans.

Only a few hours after the news, Minister of Culture, Sports and Tourism Nguyễn Ngọc Thiện also extended his congratulations together with a cash prize to the 42-year-old shooter.