President Tran Dai Quang arrived in Antananarivo, Madagascar on November 25, beginning his trip to the country to attend the 16th Francophone Summit from November 26-27, at the invitation of the host country’s President Hery Rajaonarimampianina. 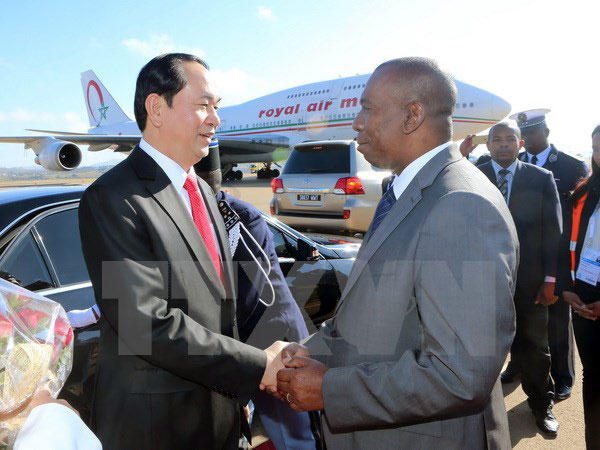 The Vietnamese leader was welcomed at the Ivato international airport by Madagascar’s Prime Minister Olivier Mahafaly Solonandrasana, Vietnam’s Consul General in the country Eric Nazaraly, and representatives from the summit’s organising board.

The relationship between Vietnam and the Fancophone Community has recorded fruitful developments.

Over the last 30 years, especially in the periods of economic blockage and embargo, Vietnam has received support in terms of capital, expertise and technology from the community.

The community also serves as a channel for Vietnam to enhance bilateral relations with its developed country members.

Vietnam now has a stronger voice in designing and realising cooperation strategies of the community.

Through the forum, Vietnam has promoted bilateral relations with a number of its member nations.

With the successful organisation of the 7th Francophone Summit in 1997 in Hanoi, Vietnam made important contributions to institutionalising political activities and fostering links in economy, politics, culture, language, and education-training among the Francophone community’s member nations.

Vietnam has actively and practically joined in almost all prioritized fields of the community, from outlining cooperation strategies, accelerating administrative and financial reforms and adjusting resources for education and development fields.

The country is said to be one of key members of the community.

In recent years, the International Organisation of La Francophonie and relevant agencies have coordinated with a number of Francophone member countries to implement projects in Vietnam./.