President Tran Dai Quang, his spouse and a high-ranking delegation arrived in Rome on November 21 afternoon (local time), beginning his State visit to Italy from November 21-24, at the invitation of his Italian counterpart Sergio Mattarella. 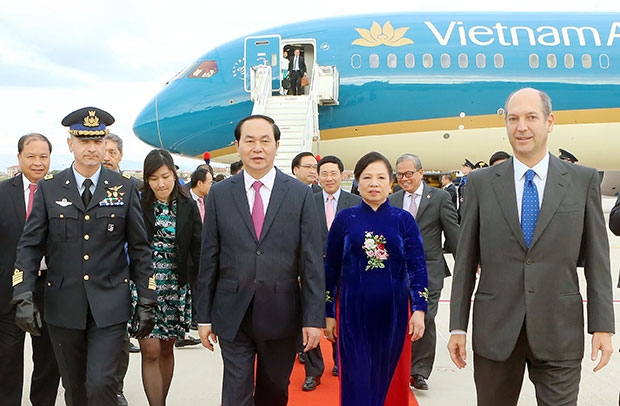 President Quang will visit the Vatican on November 23 as a guest of Pope Francis.

The official welcoming ceremony will take place at the Presidential Palace in Rome at noon of November 22 (local time).

Italy’s senior leaders have affirmed their resolve to step up multi-faceted collaboration with Vietnam, regarding the country as a priority development partner in Southeast Asia and a destination for Italian businesses.

Trade between the two countries has increased years by years, reaching 4.3 billion USD in 2015.

Italy ranks 31 out of 112 countries and territories investing in Vietnam with 77 projects valued at 360 million USD, mostly in processing, manufacturing, leather and footwear, construction, lavatory equipment and steel processing.

The Italian Government has listed Vietnam as one of ten newly-emerging markets to prioritise trade and investment ties with.

The two countries also set up a joint committee on economic cooperation.

Currently, nearly 5,000 Vietnamese live in Italy, mostly in the northern region with a thriving industry and a lot of job opportunities./.