President Tran Dai Quang, his spouse and a high-level Party and State delegation arrived in Havana on November 15 (local time) to begin the official visit to Cuba from November 15-17 to enhance the brotherhood and comprehensive cooperation between the two countries’ Parties, States and peoples. 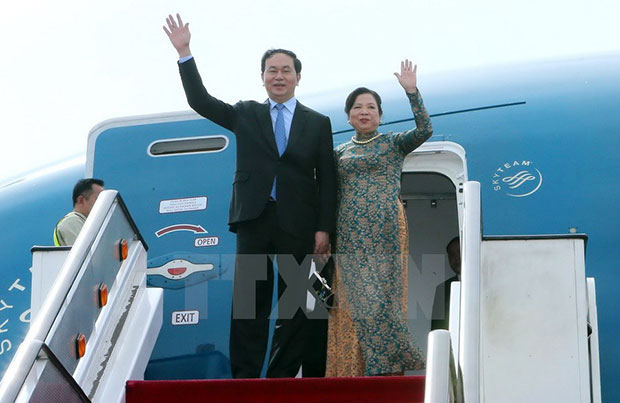 Upon his arrival, the President met with Cuban leader Fidel Castro, during which he confirmed that the Vietnamese leaders and people always remember and highly value the remarkable contributions of Fidel Castro to the establishment and development of the two countries’ solidarity and inclusive collaboration over the half century.

He stressed that Vietnam persistently supports the revolutionary cause of Cuban people and attaches great importance to reinforcing the special rapports between the two nations.

Cuban leader Fidel Castro recalled his deep impression during his tours to Vietnam , especially to the newly-liberated region in the central province of Quang Tri in September 1973.

The leader congratulated Vietnam on the successful organisation of the 12 th National Party Congress, and praised the country’s cause of liberation and current national building and defence.

On behalf of the Vietnamese Party, State and people, President Quang congratulated the Cuban counterparts on the fruitful outcomes of the 7th National Party Congress in April, as well as Cuba’s significant achievements in updating new economic models and diplomatic activities.

Host and guest also reviewed the historical milestones in the two countries’ relations over the past five decades, and exchanged regional and international issues of mutual concerns.

While visiting the Vietnamese Embassy in Cuba, President Quang urged the staff to support the implementation of the two countries’ economic, trade and investment cooperation projects to propel the bilateral relations forward.

Two-way trade is recorded about 200 million USD per year./.