President Tran Dai Quang attended a grand ceremony held in the northern midland province of Phu Tho on April 6 (the 10th day of the third lunar month) to commemorate the death anniversary of Hung Kings – the legendary founders of of the nation. 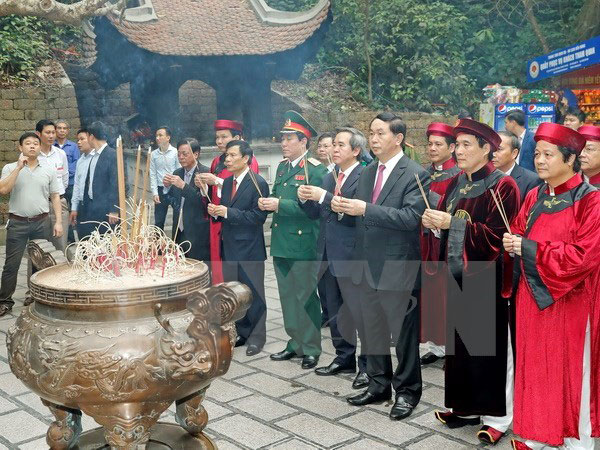 President Quang, together with other Party and State leaders and local officials offered incense, flowers and fruits to the national founders at the Hung Kings Temple, the national special relic site, on Nghia Linh Mountain.

Chairman of the People’s Committee of Phu Tho province Bui Minh Chau delivered a eulogy praising the kings for founding and protecting the nation, affirming that Lac Hong descendant generations will unite together, under the leadership of the Communist Party of Vietnam, to overcome difficulties and seize opportunities to build a prosperous and civilised nation, making contributions to peace and friendship in the region and the world as well.

Afterwards, President Quang and delegates laid wreaths at the tomb of the 6th Hung King and offered flowers in tribute to late President Ho Chi Minh.

Following the incense-offering ceremony, millions of Vietnamese people across the country and abroad paid homage to the nation founders at the temple complex.

The same day, provinces and cities nationwide held a wide range of activities in commemoration of the Hung Kings.

The worshipping rituals of the Hung Kings are closely related to the ancestral worship traditions of most Vietnamese families, an important part of people’s spiritual life. It was recognised as UNESCO Intangible Cultural Heritage of Humanity in 2012.

According to the organisers, some 8 million domestic and foreign visitors have flocked to the Hung Kings Temple those days.

On this occasion, Presiden Tran Dai Quang also visited and worked with the provincial police force, asking the local security force to tackle sophisticated emerging issues in a timely manner while stepping up the fight against crimes.

Party and force building is another important task of the provincial police force, he added./.