President Tran Dai Quang has hailed the outcomes of the 39th meeting of the Vietnam-Laos Inter-Governmental Committee, saying that orientations and contents agreed at the meeting are important to accelerate the implementation of high-level agreements. 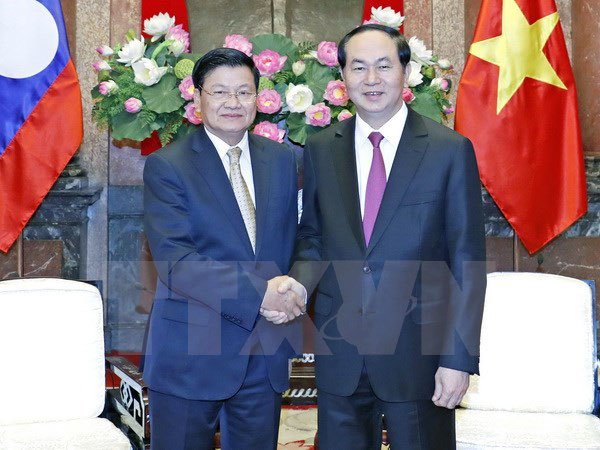 Receiving Lao Prime Minister Thongloun Sisoulith in Hanoi on February 8, the President asked the PMs of the two countries to direct ministries, agencies and localities to realise the outcomes of the 39th meeting while continuing to facilitate the exchange of visits at all levels.

The Lao PM is in Vietnam to co-chair the 39th meeting of the Vietnam-Laos Inter-Governmental Committee, which took place in the Hanoi on February 8.

He proposed close coordination between Vietnam and Laos to celebrate the 55th anniversary of bilateral diplomatic ties and the 40th anniversary of the signing of the Treaty of Amity and Cooperation this year, as well as offering mutual support in regional and global forums to further deepen linkages in the ASEAN Community, increase ASEAN’s central role and common voice in regional strategic issues.

The Vietnamese State leader reiterated Vietnam’s consistent policy of giving high priority to the special solidarity with Laos and full support for Laos’ reform and national construction and defence.

The Lao PM, for his part, informed the host of the outcomes of the 39th meeting, affirming that both sides have pledged to build on the past achievements to further deepen bilateral economic ties to match the growing political links between the two nations./.

Meeting on ground clearance of the North-South expressway route