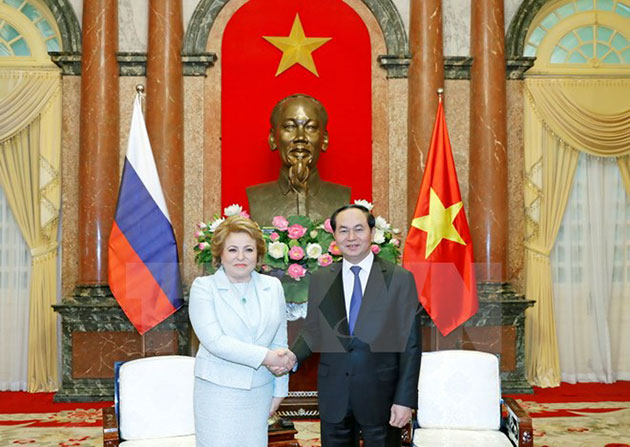 During a reception for the Russian top legislator in Hanoi on February 21, President Quang expressed his hope that the two countries will witness breakthroughs in economic and trade cooperation in 2017, suggesting the two sides soon early reach consensus on priority areas of cooperation for the year.

He stressed Vietnam considers energy cooperation with Russia as a strategic field, adding that Vietnam highly evaluates the effective operation of the joint ventures Vietsovpetro and Rusvietpetro, as well as contributions by the two countries’ petroleum industries to bilateral economic relations.

The President noted that the two sides should coordinate closely to effectively implement the free trade agreement between Vietnam and the Eurasian Economic Union, thus fully tapping advantages brought by the deal to expand export and investment to each other’s markets.

In addition, Vietnam wishes to further foster cooperative ties with Russia in the fields of security-defence, education-training, culture, tourism and science-technology, as well as affiliation between localities, President Quang said.

Agreeing on the host’s view, Chairwoman Matvienko said enhancing cooperation with Vietnam in all fields is a top priority in Russia’s foreign policy, adding that the Federal Council and parliamentarians will do their best to contribute to strengthening bilateral relations.

She urged the two countries to further step up cooperation so as to lift two-way trade to 10 billion USD by 2020 from the figure of 2.7 billion USD in 2016.

Russia wants to import more Vietnamese farm produce, she stated, noting that Russian localities have closely cooperated with Vietnamese counterparts, especially in the fields of trade, investment, culture, and education-training.