President Truong Tan Sang has affirmed that the Vietnam-US ties has become an indispensable element in the concerted efforts of the international community to maintain peace, security and development in the region.

Addressing a Policy Dialogue on Vietnam-US relations hosted by the Asia Society in New York on September 28, he confirmed t hat it is the common interests that became the driving force for the two nations to overcome the war legacies and differences to become comprehensive partners today.

“From the first days of negotiation on normalization, we realized and agreed that apart from major interests in our bilateral relations, our two nations share a common desire and interest in maintaining peace, stability and cooperation for development in Asia Pacific. This common understanding reflects the strategic vision of our leaders resulting in political will needed for our two countries to overcome many obstacles, both internally and externally, to become friends and comprehensive partners like we are today.”

Our shared interests keep expanding as our cooperation and friendship grow at bilateral, regional and global levels. Today, we both have interests in maintaining peace, security and prosperity in the region. This also covers safety and security of navigation and overflight, law enforcement at sea, maritime environmental protection and dispute resolution through peaceful means on the basis of international law without the use or threat of force. 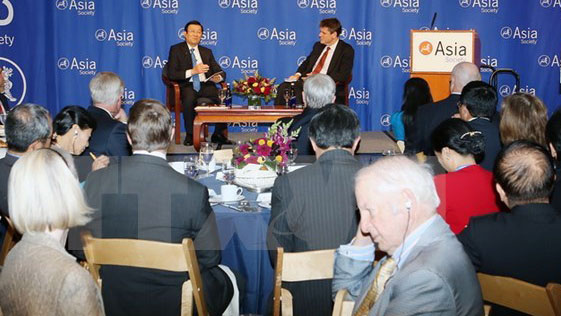 What Vietnam and the US hope for and work hard to attain is also the common aspiration of all peoples in the region,” the President told the audience, who included Asia Society’s President and CEO Josette Sheeran, Executive Vice President Tom Nagorski, former Australian Prime Minister Kevin Rudd and nearly 100 US government officials, scholars and business people.”

The Vietnamese State leader made several proposals on how to take advantage of cooperation opportunities and deepen the bilateral comprehensive partnership efficiently and practically.

He said, “ Bilaterally, the two sides need to work closely to realize the Vietnam – US Joint Vision Statement between General Secretary Nguyen Phu Trong and President Obama in July this year, and the Joint Declaration on Comprehensive Partnership between President Obama and I in July 2013 with 9 pillars of cooperation. I want to emphasie that in this process, the most crucial point is trust building, especially political trust.

This is the lesson that we have withdrawn from the past and from differences in ideology, political regime, culture and tradition between the two nations. Vietnam would and only would have such confidence in the US when the US strictly fulfills its commitments to respect the sovereignty, territorial integrity and political regime of Vietnam and take concrete actions to realise the statement “the US wishes for a Vietnam of prosperity, strength and independence”.

He continued, “On our part, we will continue with the comprehensive reform to build Vietnam into a country of “wealthy people, strong nation, just, democratic and advanced society”. In this regard, the fundamental rights and freedoms of the people are increasingly respected and ensured. We have taken efforts to build a law-governed state of the people, by the people and for the people.

“On external front, Vietnam will continue to pursue the foreign policy of independence, self-reliance, diversification and multilateralization of external relations and comprehensive international integration, being a reliable partner and a responsible member of the international community. Along that line, Vietnam will always attach importance to the relations with the US. We sincerely wish to join hands with the US in building a friendly and long-term partnership for the benefit of the two countries and for peace, stability and development in the region.”

The President added that at the regional level, Vietnam and the US need to cooperate closely with each other, and with other countries to contribute to maintaining peace, stability, cooperation and development in Asia – Pacific through a number of measures.

He elaborated that “First, regional mechanisms should be consolidated, including ARF, EAS, APEC, ADMM+, etc., to safeguard peace, security and development. In 2017, the APEC Summit will be hosted in Vietnam, and we hope that will be an opportunity for the two countries to cooperate and contribute to the goals of economic development in the region.

“Second, ASEAN’s centrality in regional mechanisms should be upheld. Third, we should exert efforts to conclude TPP negotiations, bringing about development opportunities for its members. Fourth, it is essential to ensure compliance with international law by regional countries, particularly the 1982 UNCLOS, on settlement of maritime disputes, to reinforce the effectiveness of the DOC and to achieve the COC. Fifth, we should cooperate closely within the framework of the Lower Mekong Initiative.”

At the global scale, the two countries need to intensify cooperation and coordination at major multilateral forums, particularly within the UN framework, President Sang said, adding that the two sides should focus on issues of mutual interests such as development cooperation, peace and security, non-proliferation and arms control, anti-terrorism, nuclear safety, cyber security, water security, climate change and sea-level rise.

At the dialogue, the President also answered queries of US officials, scholars and businesses on Vietnam’s development prospects, potential and opportunities of the country when joining TPP negotiations, and its relations with big nations.

The same day, the Vietnamese state leader visited the Associated Press (AP) headquarters in New York, and granted an interview on Vietnam’s socio-economic affairs and foreign policy, and the regional and international situations to the agency.

Also in New York, Deputy Prime Minister and Foreign Minister Pham Binh Minh had a meeting with Secretary-General of the Permanent Court of Arbitration Hugo Hans Siblesz, who pledged that the PCA will support Vietnam in training legal experts and officials.