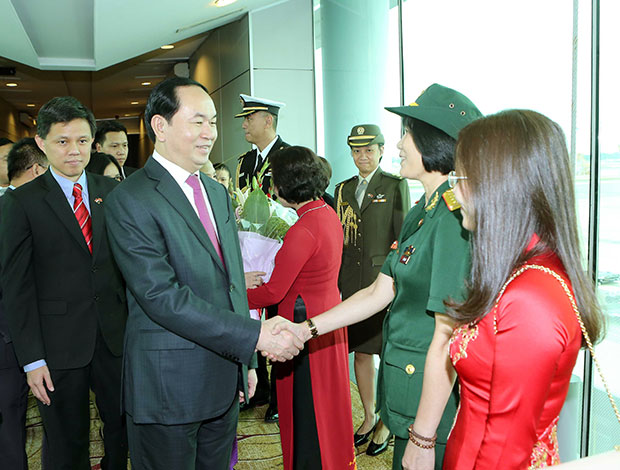 The visit aims to continuously implement Vietnam ’s diplomatic policy set at the 12th National Congress of the Communist Party of Vietnam and deepen international relations, including the strategic partnership with Singapore .

Latter the day, President Quang had a meeting with staff of the Vietnamese Embassy in Singapore and representatives from the overseas Vietnamese community. He underlined the Party and State’s measures to maintain macro economic stability, promote growth and accelerate administrative procedures as well as increase national competitiveness, improve climate change adaptation, and ensure social welfare.

The President expressed his pleasure at the growing strategic partnership between Vietnam and Singapore .

He highlighted the two countries as dynamic economies in Asia-Pacific with two-way trade surpassing 9 billion USD in 2015.

Singapore has 1,643 valid investment projects with a total registered capital of over 37.9 billion USD in Vietnam at present, placing it in the third position out of the 116 countries and territories investing in the latter.