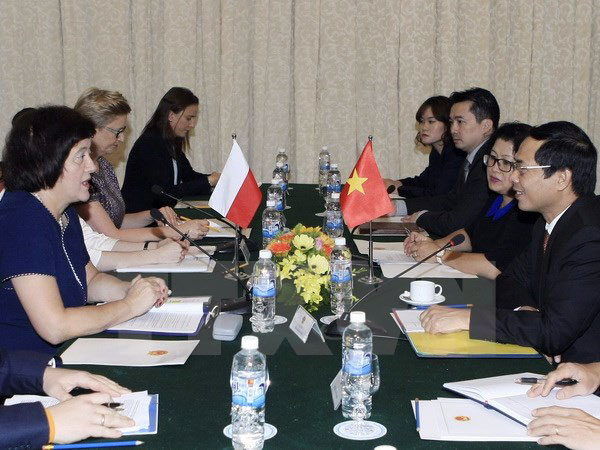 Wronecka also affirmed that the Polish government will push for the early signing of the Vietnam-EU Free Trade Agreement, noting that the enforcement of the FTA will help boost multi-faceted cooperation between Poland and Vietnam.

The Deputy Foreign Minister and her Vietnamese counterpart Bui Thanh Son shared the view that bilateral ties have fruitfully developed in recent years and that there is much potential for the two nations to enhance links in politics-diplomacy, security-defence, sci-technology, education and training, and infrastructure development.

The two ministries will serve as a bridge to promote closer connection between the two nations’ ministries and sectors, aiming to effectively implement agreements reached by Vietnamese and Polish leaders, they said.

Both host and guest spoke highly of the partnership between the two foreign ministries, including the maintenance of the political consultation mechanism on issues concerning bilateral relations, regional and global situation, and view exchange on vital international issues.

The two sides pledged to continue the exchange of all-level visits between the two nations, particularly to make thorough preparations for the Vietnam visit by the Polish President next year.

The two sides will foster their coordination at international forums, especially the UN, UNESCO, and the Asia-Europe Meeting (ASEM), as well as within the cooperation between ASEAN and Vietnam with the EU.

The Polish guest shared and supported Vietnam’s stance on settling disputes, including disputes in the East Sea, by peaceful measures and in line with international law, especially the 1982 United Nations Convention on the Law of the Sea (UNCLOS), to ensure security, safety and freedom of navigation and aviation in the East Sea./.