Prime Minister Nguyen Xuan Phuc met with Chairman of the National Committee of the Chinese People’s Political Consultative Conference (CPPCC) Yu Zhengsheng in Beijing on September 12 a s part of his ongoing visit to China. 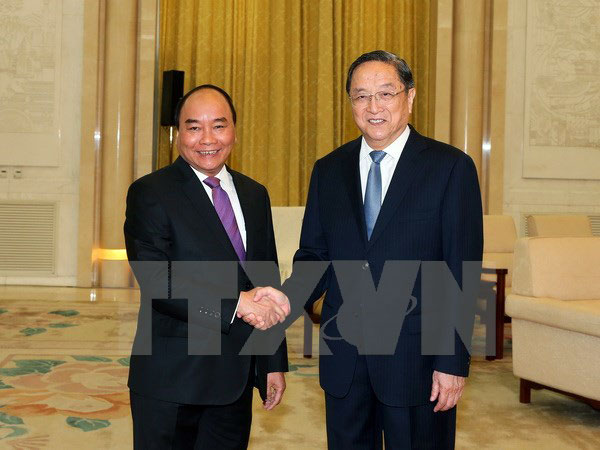 The PM spoke highly of recent close coordination between t he Vietnam Fatherland Front (VFF) and the CPPCC, hoping that the two sides will continue working closely and upholding their role in promoting affiliation and exchange between the two countries and peoples, towards enhancing all-round cooperation in a more practical manner and solving existing problems in the bilateral ties.

He congratulated China on its recent great achievements on socio-economic development and comprehensive reform the Party, Government and people of China have obtained, saying that the CPPCC made significant contribution to the successes.

For his part, Yu Zhengsheng affirmed that the Chinese Party, Government and people consistently pursue the motto “friendly neighbourliness , comprehensive cooperation , long – term stability and looking toward the future” to maintain and boost the China-Vietnam traditional friendship.

China will make every effort to further develop the comprehensive strategic cooperative partnership between the two countries, in a stable, healthy and sustainable fashion, he stressed.

The host agreed to maintain close coordination between the CPPCC and the VFF, saying that the two sides continue boosting exchange and cooperation among social organisations and people from all walks of life of both nations, thus reinforcing mutual trust and understanding and contributing to the bilateral ties./.