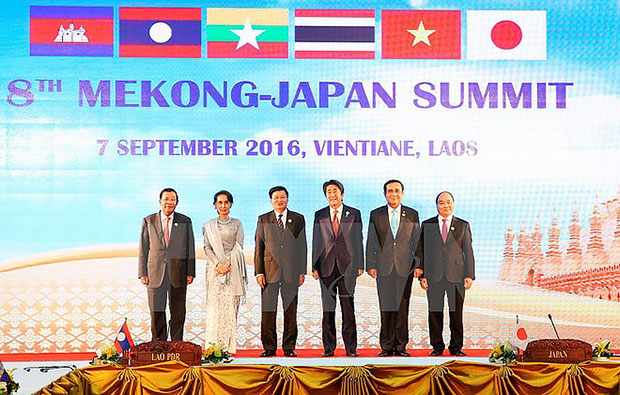 The Vietnamese Government leader made the statement in Vientiane, Laos on September 7 while attending the 8th Mekong-Japan Summit on the sidelines of the 28th and 29th ASEAN Summits and related meetings.

The PM spoke highly of achievements reached in the implementation of the “Tokyo Strategy 2015” and the “Mekong-Japan Connectivity Initiative” while stressing the need to prioritise the realisation of important contents of Mekong-Japan cooperation.

He suggested the Japanese Government assist the Mekong countries in building new roads along economic corridors, especially the Vientiane-Hanoi Expressway, which will be an important trade route not only connecting the two capital cities of Vietnam and Laos but also creating a new connectivity corridor.

He also proposed the Japanese Government continue experience sharing and technology transfer to help Mekong countries develop a green and smart agriculture that is adaptable to climate change.

Sharing his viewpoint on the Joint Statement of the 8 th Mekong-Japan Summit, Prime Minister Phuc said that countries need a peaceful, stable and cooperative environment to develop sustainably.

He expressed his deep concern over recent developments in the East Sea, saying that involved parties should exercise restraint, take no unilateral actions to complicate the situation, and make efforts to ease tension and prevent possible conflicts at sea.

They must respect legal and diplomatic processes and solve disputes by peaceful measures on the basis of the UN Charter and international law, especially the 1982 UN Convention on the Law of the Sea (UNCLOS), while seriously implementing the Declaration on the Conduct of Parties in the East Sea (DOC) and working towards a Code of Conduct in the East Sea (COC).

The Mekong countries highly valued Japan’s assistance for the GMS, citing that after one year of carrying out the “Action Plan for Realisation of the New Tokyo Strategy 2015” and the “Mekong Industrial Development Vision”, Japan pledged to sponsor 250 billion JPY (2.43 billion USD) for the GMS countries in 2016-2018.

Regarding future cooperation orientations, the leaders agreed to enhance the Mekong-Japan cooperation for the sustainable, comprehensive and balanced development of the Mekong region, and foster human security and Green Mekong development.

They also reiterated the vital importance of the sustainable management and development of Mekong River water resources and applauded Japanese Prime Minister Shinzo Abe’s commitment to contributing more to protecting the Mekong River environment and increasing cooperation with and support for the Mekong River Commission in implementing drought and flood prevention projects.

The summit issued a Joint Statement and agreed to organise the 9th event in the Philippines in 2017./.