Phu Tho prepares for an epitomised Hung Kings Temple Festival

The northern midland province of Phu Tho is aiming to hold a hugely successful Hung Kings Temple festival in 2017, heard a conference to review planning for the festival on March 15. 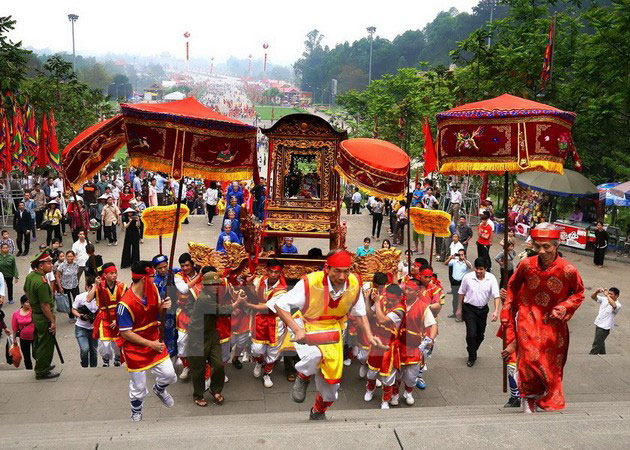 To achieve the target, measures were taken to ensure security, environmental sanitation, order and safety for the festival.

Agencies and departments were asked to resolve difficulties of sub-departments and localities in organising this year’s festival, according to Ha Ke San, Vice Chairman of the provincial People’s Committee and Head of the organising board.

The province will work with Hanoi and three other provinces of Ben Tre, Binh Phuoc and Thai Binh to hold the festival, which is set to take place from April 1 – 6.

This year’s event will feature various activities such as photo exhibitions, water puppet shows and displays of documents on Xoan Singing Heritage.

The couple then decided to separate to populate the land, so half the children followed their mother to the highlands and the rest went with their father to the sea.

He then became King Hung and founded the first nation in the history of Vietnam, Van Lang.

Ruling the country for 18 generations, the Hung Kings taught the people how to grow wet rice.

They chose Nghia Linh Mountain, the highest in the region, to perform rituals devoted to rice and sun deities to pray for lush crops.

To honour the Hung Kings, a complex of temples dedicated to them was built on Nghia Linh Mountain, and the tenth day of the third lunar month serves as their anniversary

The worshipping rituals of the Hung Kings are closely related to the ancestral worship traditions of most Vietnamese families, an important part of people’s spiritual lives.

It was recognised as UNESCO Intangible Cultural Heritage of Humanity in 2012./.