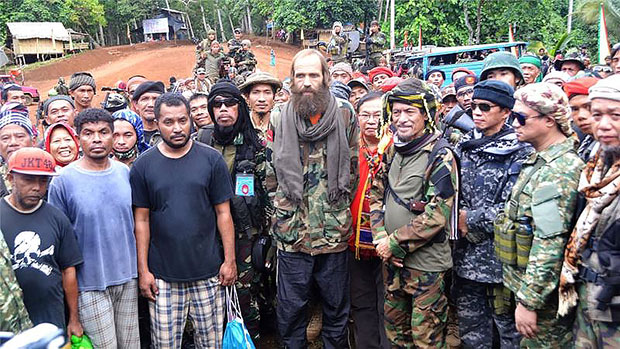 Sekkingstad (C) and three Indonesians to his right are photographed in Indanan town [Source: AFP)

Philippine Presidential Advisor on the Peace Process Jesus Dureza said that the Indonesian fishermen were handed over to the Moro National Liberation Front (MNLF) and then to Sulu Governor Abdusakur Tan II in the morning of October 2.

They were earlier kidnapped by the Abu Sayyaf offshore Sabah province in July. Under the pressure of an operation by the Philippine army, last month, the Islamic armed group released other three Indonesian fishermen kidnapped in July.

The Abu Sayyaf Islamist militant group was formed in the 1990s. It currently comprises about 400 gunners operating in the southern region of the Philippines.

The group is detaining 10 hostages who is from the Philippines and other countries./.