Party General Secretary Nguyen Phu Trong congratulated the women’s movement and the Vietnam Women’s Union (VWU) for their past achievements in his speech at the opening of the 12th National Women’s Congress in Hanoi on March 7. 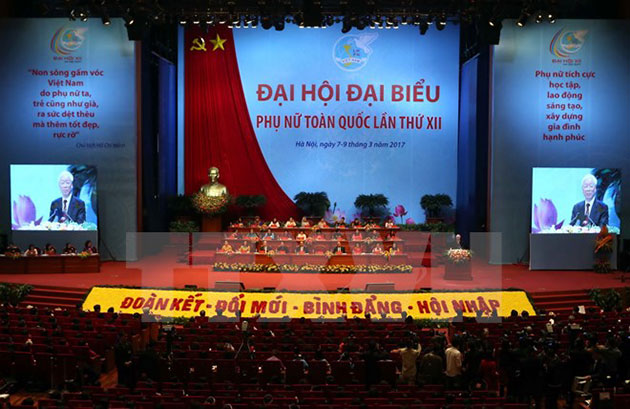 The Congress for the 2017-2022 tenure, themed “Solidarity – Renovation – Equality – Integration”, attracted 1,153 delegates representing women from walks of life across the country.

Accounting for more than half of the population and 48 percent of workforce, the Vietnamese women have been active in every aspect, actively responded to patriotic emulation campaigns and abided by the Party policies and State laws, he said.

He praised the VWU for continuing to uphold its crucial role in women work and gender equality cause, better performing its functions of representing and protecting legitimate rights and interests of women, serving as a bridge connecting the Party and women, contributing to building the great national unity, a strong and transparent Party and political system.

The Party chief said the rate of female leadership in the political system is growing, with 25 percent of legislators being women.

Women working in science-technology sector account for nearly 40 percent and female scientists make up over 6 percent of the total.

Directing VWU’s activities in the near future, he said the union needs to fully grasp the Resolution adopted by the 12th National Party Congress and take specific measures to bring it into life.

The leader requested further improving the quality of emulation campaigns and engaging them into those launched by the Vietnam Fatherland Front, including the campaigns “For the Poor” and “Studying and following moral example and lifestyle of President Ho Chi Minh”.

It is necessary to raise women and VWU’s role in building cultural and happy families, he said, adding that VWU chapters at all levels should continue assisting women in implementing marriage-family policies, maternal and child health care and protection, and environment protection.

The VWU chapters were asked to adopt synchronous measures for the full advancement of women in terms of brainpower, morality, well-being, innovation capacity and sense of civic responsibility while building a contingent of qualified staff with political firmness and virtue and introducing capable women to Party committees, local authorities, ministries, agencies and sectors from the grassroots to the central level.

He wished that the VWU would seriously implement the Resolution on strengthening Party building and rectification set by the fourth plenum of the 12th Party Central Committee, encourage its members to effectively join social supervision and criticism, Party and administration building, as well as the fight against corruption, wastefulness and negative phenomena.

Speaking at the event, VWU Chairwoman for the 11th tenure Nguyen Thi Thu Ha said the Congress will review the past activities, discuss orientations and goals for the 2017-2022 tenure, adopt the amendments and supplements to VWU’s regulations and elect an executive board of the VWU Central Committee.

A highlight in the past tenure was support for women in economic development, she said, adding that VWU chapters offered assistance to more than 2.4 million poor households led by women, 430,000 of them have escaped from poverty via funding from the Vietnam Bank for Social Policies and the Bank for Agriculture and Rural Development.

They raised over 1 trillion VND (43.4 million USD) to provide care for policy beneficiaries and families of soldiers tasked with safeguarding sea and island sovereignty, repaired about 20,000 houses, and successfully proposed 119 policies.

During the 2017-2022 tenure, VWU sets the goal of improving material and spiritual lives of women, building a strong and professional women’s union and continuing emulation campaigns for the sake of gender equality and women’s advancement.

It will set the three key tasks of assisting women in building a happy family, start-ups, economic development, and environment protection; engaging them into building the Party and administration, social supervision and criticism; and stepping up people-to-people diplomacy./.