The broadcasting of analogue terrestrial television will be ceased in several northern and southern localities before July 1. 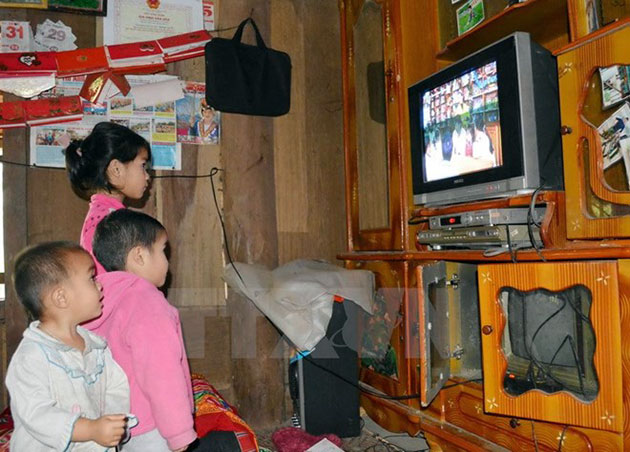 All television programmes will be broadcast digitally using the Digital Video Broadcasting – Second Generation Terrestrial (DVB-T2) standard, Minister of Information and Communication Truong Minh Tuan said at a meeting in Hanoi on February 14.

Director of the Authority of Radio Frequency Management Doan Quang Hoan said the halt of analogue terrestrial television is encountering some difficulties.

The implementation of the digitalisation project in major cities of Hanoi, Hai Phong, Ho Chi Minh City, and Can Tho was eight months slower than scheduled, he noted.

He suggested supporting the coverage of terrestrial digital television in centrally-run cities and neighbouring provinces, and combining it with satellite one in remote areas.

Minister Truong Minh Tuan asked the management board of the TV digitalisation programme to coordinate with local authorities to support poor and near-poor households in the field.

The Prime Minister issued Decision 2451-QD-TTg in 2011 approving the scheme on the digitalisation of the transmission of terrestrial television broadcasting by 2020 with a total cost of 1.71 trillion VND (75.1 million USD).

Da Nang was the first locality in Vietnam and the ASEAN region to complete the digitalisation of terrestrial television broadcasts.

The city replaced analogue with digital terrestrial TV from November 1, 2015.

Digital terrestrial TV has been broadcast across Hanoi, Hai Phong, Ho Chi Minh City and Can Tho./.