More than 100 woodblocks and official documents under the Nguyen dynasty (1802-1945) demonstrating Vietnam’s sovereignty over Hoang Sa (Paracel) and Truong Sa (Spratly) archipelagos are being exhibited in the Central Highlands province of Lam Dong. 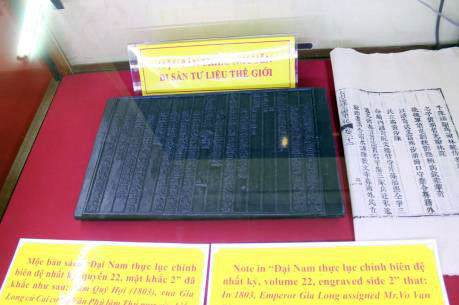 The woodblocks and official documents were showcased in four sections, including documents and maps published in Vietnam and western countries from the 16th to 19th centuries proving Vietnam’s sovereignty over these archipelagos.

On display at the exhibition, which was opened on July 3, are also Chinese maps indicating that the southernmost part of China is Hainan island, as well as documents and objects relating to the exercise of Vietnam’s sovereignty over Hoang Sa and Truong Sa archipelagos.

Some valuable documents include “The eastern part of Quang Ngai province has Hoanh Sa (Truong Sa) island)” and “Hoang Sa island is in the east of Re island”, which are extracted from the book “Dai Nam nhat thong chi” (Record of the Unity of Dai Nam), and “King Minh Mang requests Pham Huu Nhat marine corps to measure, draw map of Hoang Sa island in 1836 extracted from the book “Dai Nam thuc luc chinh bien” (Veritable Records of Dai Nam).

According to Nguyen Xuan Hung, Director of the National Archives Centre No. 4 in Da Lat city, said this is the first time nine woodblocks under the Nguyen dynasty proving Vietnam’s sovereignty over Hoang Sa and Truong Sa archipelagos have been displayed to serve the public.

Jointly organised by the centre and the State Records Management and Archives Department under the Ministry of Home Affairs, the exhibition aims to help domestic and international visitors to gain a better insight into Vietnam’s sovereignty over the two archipelagos.

As many as 34,619 woodblocks are being preserved at the National Archives Centre No. 4./.