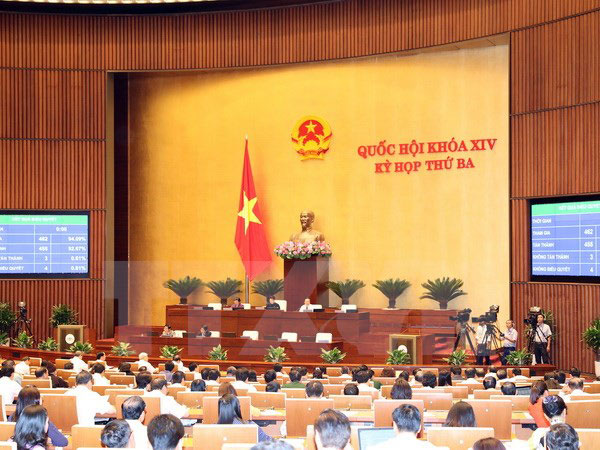 With 93.28 percent of approval, the revised on Technology Transfer comprises six chapters and 63 articles, stipulating technological transfer from abroad to Vietnam and vice versa, as well as within the country, rights and responsibilities of individuals and entities concerned, project appraisal and State management, among others.

Earlier, deputies heard a report on acquiring feedback on the revised Law on Technology Transfer delivered by member of the NA Standing Committee and head of the NA’s Committee on Science, Technology and Environment Phan Xuan Dung.

Meanwhile, the Law on Irrigation won 93.08 percent of approval with 10 chapters and 60 articles. It covers irrigation strategy and planning; management, exploitation and operation of irrigational works and water reservoirs; rights and responsibilities of relevant individuals and entities.

According to the report on acquiring feedback on the draft Law, the NA Standing Committee agreed to add regulations on diversifying investment in managing and tapping irrigational works.

Adopted with 89.21 percent of yes votes, the amended Law on Tourism, which comprises 9 chapters and 78 articles, stipulates tourism natural resources, products and activities, rights and responsibilities of concerned individuals and entities at home and abroad.

The report on acquiring feedback on the draft revised Law on Tourism said the law covers regulations on ranking lodging facilities on voluntary basis, tourism planning and management.

Later, the NA deputies passed a draft resolution approving the State budget balance for 2015 with 92.46 percent of yes vote.

With 82.08 percent of approval, they also adopted a resolution on splitting land reclamation, recovery, assistance, resettlement of the Long Thanh International Airport project into a component project. It comes into effect as from the day the NA approved./.