With 89.88 percent of votes, the National Assembly on November 10 approved a resolution on a medium-term public investment plan for the 2016-2020 period, which stipulates a maximum of two quadrillion VND (equivalent to 89.56 billion USD) of five-year spending. 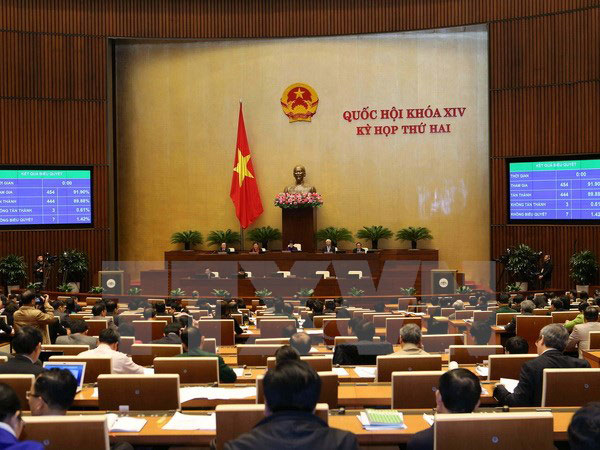 The resolution was approved with 89.88 percent of votes (Photo: VNA)

The plan also prepares spare capital of 10 percent of respective sources for the settlement of unexpected issues, while ministries, sectors and localities will also put aside 10 percent of the capital they are allocated.

The Long Thanh Airport project will receive 5 trillion VND to conduct ground clearance, while other major projects of the country will get 80 trillion VND.

The NA will consider the sum of investment for each national project after receiving documents from the Government in line with the Public Investment Law.

Domestic capital, excluding capital mobilised from Government bonds, will prioritise the payment of capital construction debts and the reclaiming of advance payments, with no spending on the payment of debts arising after December 31, 2014.

The capital will also be invested to projects using Official Development Assistance (ODA) and soft loans from foreign sponsors, as well as projects scheduled to be completed between 2016 and 2020.

Capital mobilised from the Government bonds will be spent on making up missing Government-bond capital for major transport and irrigation projects and works, as well as evacuation and resettlement for Son La hydropower project.

The remaining capital will be invested in projects in the fields of health care, transport, irrigation and school building for ethnic minority students.

The resolution also set out a number of measures for the implementation of the medium-term public investment plan, focusing on restructuring State budget spending in an effective manner by reducing regular expenditure.

Advance payment will be minimised, while the use of spare capital will be tightly managed, according to the resolution which also plans to allocate State capital and mobilise other sources for infrastructure building through public-private partnerships (PPP).

The resolution also aimed to encourage the engagement of the private sector in heath care, education, culture, sports as well as infrastructure projects in rural areas.

Leaders of the Government, ministries, central agencies and localities will bear legal responsibility for choosing investments and the approval of investment projects.

They were asked to make investment decisions after careful verification and consideration of their efficacy, capital sources and payment capacity.

Inspection and supervision of public investment management will be strengthened, while strict punishment will be applied to individuals and collectives that break the law, said the resolution, adding that the objectives and efficiency of the investment will be closely controlled to ensure transparency./.

Training on securities and stock market

The workshop on infectious disease prevention and control

The smart traffic management system to be invested by Cần…