The 9th session of the 13th National Assembly focused on ways to complete socio-economic tasks set for 2015.

Despite some positive changes, Vietnam faces numerous difficulties and challenges demanding that the whole political system, Party, people and army unite to reach the targets.

According to a government report presented at the National Assembly, positive changes were reported in the early months of this year. CPI in the first four months increased just 0.04%, the lowest in several years.

Total export value rose 8.2% while implemented FDI capital was up 5%, reaching a total of US$4.2 billion. Vietnam has signed one Free Trade Agreement and is expected to sign another FTA with the Asia-Europe Union. Vietnam is negotiating FTAs with several other partners.

The National Assembly tasked the government with continuing to improve Vietnam’s investment environment and solving problems for business and production activities. The government is urged to flexibly and effectively coordinate monetary, fiscal and other policies, stabilize the macro economy, ensure balance in the economy and achieve the set growth target. 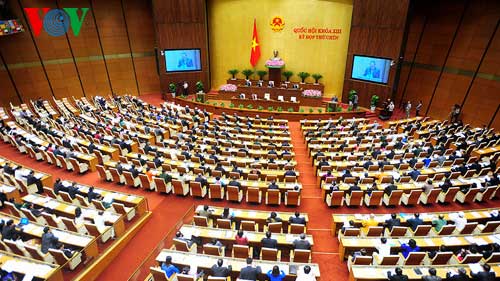 The government also needs to implement coordinated measures to expand export markets and accelerate the settlement of bad debts. The campaign encouraging Vietnamese people to prioritize Vietnamese goods also needs to be promoted.

One of the major solutions is to increase economic restructuring in coordination with revising the growth model.

“The government will take coordinated and effective measures to implement the Master Project on Economic Restructuring. 289 State-owned enterprises are expected to be equitized this year and the list of SOEs that need to be equitized will be reviewed,” he noted.

“The government will increase support for small and medium-sized and household enterprises, encourage the establishment of big enterprises, and promote strong trademarks that are regionally and globally competitive,” Phuc added.

Deputy Head of the Economic Committee of the National Assembly Nguyen Duc Kien said, “Renovating the growth model and economic restructuring play a decisive role because their impact will continue to be felt in the following years.”

“In the next three years, the government needs to focus on these two measures, and in the mean time, restructuring state-owned enterprises and public investment should be the priority. The government also needs to work out mechanisms, policies and legal documents to support these measures,” he stressed.

In response to the National Assembly Resolution, the government has put in place several measures to realize this year’s socio-economic tasks. Vietnam aims to achieve a GDP growth rate of 6.2%, increase export value of 10% and generate about 1.6 million jobs.