National Assembly Chairwoman Nguyen Thi Kim Ngan has expressed wish to further develop friendship between Vietnam and Japan to meet the expectation and interests of the two peoples. 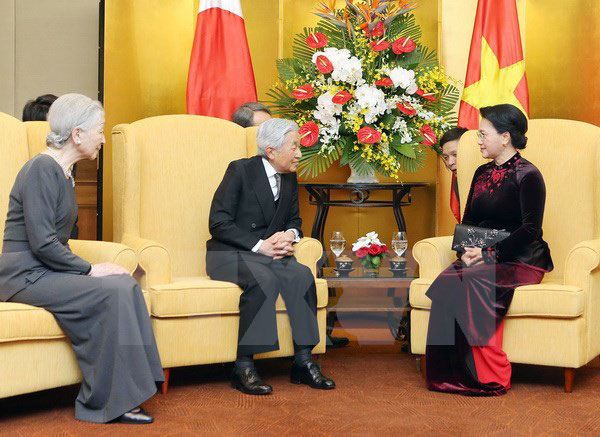 At the meeting (Source: VNA)

She made the statement in Hanoi on March 1 during a meeting with Japanese Emperor Akihito and Empress Michiko who are on a State visit to Vietnam.

The host thanked the Japanese Emperor, Empress and Imperial House as well as the Japanese government, parliament and people for assisting Vietnam in socio-economic development, including building major infrastructure works such as Can Tho bridge.

Emperor Akihito said he has looked forward to this visit, adding that he hopes it would contribute to further deepening friendly ties between the two countries.

The Emperor and Empress expressed their sympathy to the Vietnamese people over the losses caused by the impacts of climate change such as drought, saline intrusion and environmental pollution.

Both sides agreed that countries worldwide need to heed environmental protection for the sake of health and well-being of the people. They also shared common understanding on the importance of education to national development.

The NA Chairwoman wished that the Japanese imperial couple would gain an insight into Vietnam and its people as well as the close bonds between the two peoples during the visit./.