National Assembly Chairwoman Nguyen Thi Kim Ngan and President of the Senate of Cambodia Samdech Say Chhum vowed to do their best to strengthen ties between the two legislatures, partly through the exchange of high-level visits and professional expertise, during their meeting in Phnom Penh on September 28. 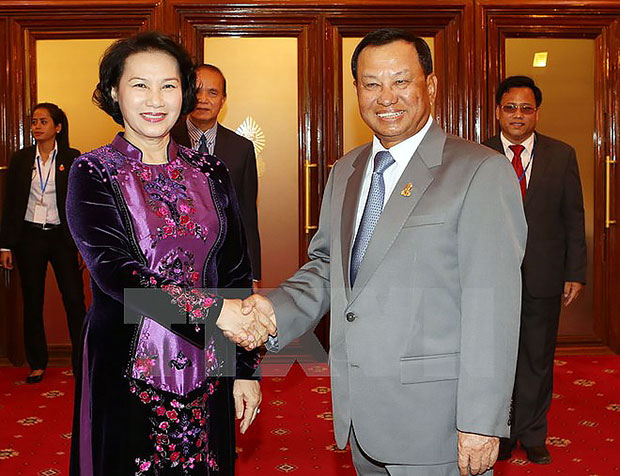 Ngan suggested the two neighbouring countries further raise public awareness of the tradition of giving mutual support to each other, especially in difficult times, among young generations.

She also took the occasion to ask the Vietnamese NA, the Cambodian Senate and legislature to continue their mutual assistance in the future.

Speaking highly of the Senate President’s role in fostering ties between the two States, the NAs and peoples, Ngan wished that in his position, Chhum will continue directing relevant units to boost bilateral ties for the benefits of the two peoples.

The guest wished that Cambodia will successfully hold the election of deputies to the communal and district councils and the NA by 2018.

Chhum, for his part, thanked the Vietnamese legislature for its assistance in personnel training and infrastructure.

He congratulated Vietnam on its achievements over the past years under the leadership of the Communist Party of Vietnam and wished that Vietnam will reap more successes in its 2016-2020 plan.

Host and guest expressed wish that the two countries would settle remaining issues to build a border of peace, friendship, cooperation and development, saying that the completion of demarcation is a great asset for later generations.

She made it clear that the Vietnamese Party, State, NA and people will exert utmost efforts to nurture the traditional friendship and multi-dimensional cooperation with Cambodia, thus meeting the aspirations of the two peoples.

The guest asked the King to instruct concerned agencies to help Vietnamese nationals settle in the country.

The Vietnamese legislature will strive together with the Cambodian Senate and NA to share information and legislation experience, as well as work closely together to monitor the implementation of signed agreements on border, trade and investment, she said.

The King, for his part, affirmed that the Cambodian people always bear in mind the great and valuable support of Vietnam, especially during the national liberation and the current national development.

He believed that the visit would further tighten the neighbourliness and long-standing friendship and solidarity between the two countries.