Mozambican Ambassador makes working visit to Can Tho

Mozambican Ambassador to Vietnam Gamiliel S. J. Munguambe paid a working visit to the Mekong delta city of Can Tho on September 14 seeking for stronger cooperation in agriculture, fishery and personnel training. 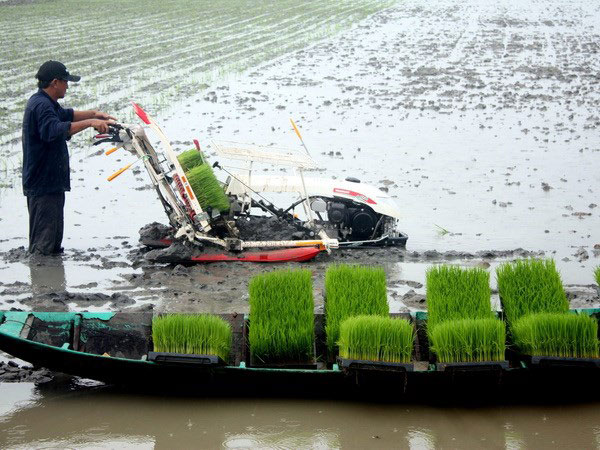 Can Tho has high-tech agriculture models (Source: VNA)

In a working session with Vice Chairman of the Can Tho city People’s Committee Dao Anh Dung, he said Mozambique’s economy greatly depends on agriculture.

Can Tho, the economic hub of the Mekong Delta region, and Mozambique have similarities in climate conditions as well as common concerns in agricultural production, he said, seeking the city’s experience in the production and processing of rice and other farm produce.

Munguambe suggested the Vietnamese and Mozambican Governments step up the implementation of bilateral cooperation programmes with the participation of leading agricultural experts in order to exchange experience and improve productivity and quality of agro-fishery products.

Mozambique highly values the efficiency of high-tech agriculture models in Can Tho and wants to learn from the locality’s experience in this field, he said.

The ambassador expressed his hope that Can Tho will work as a bridge between Mozambique and agricultural powers in Asia like Japan, Thailand and the Republic of Korea.

He proposed the Can Tho authorities consider setting up an investment network between the city and Mozambique, explaining that the two sides boast substantial potential suitable for international cooperation.

The host also suggested establishing twin relationship between Can Tho and Mozambique’s Moatize city, which has been developed into an economic area exclusively for agricultural businesses, with corporate tax decreasing to zero percent during 2016-2020.

The locality is home to many prestigious universities and agricultural research institutes of Mozambique, along with fields piloted with high technologies, he said.

For his part, Dung described agriculture as a spearhead of Can Tho thanks to high-tech applications in production, adding that the locality earns about 1.2 billion USD from agro-fishery exports annually.

Can Tho is ready to share experience in production and processing with Mozambique, he said.

The official told his guest that Can Tho plans to organise visits of the municipal authorities to Mozambique, especially Moatize city, to discuss more with the Mozambican Government about their agricultural cooperation.

At the same time, Can Tho will pay heed to cooperation programmes between universities of the two sides, he said./.