A ceremony receiving UNESCO certificate of recognition for “Practices Related to the Viet Beliefs in the Mother Goddesses in Three Realms” as part of the Intangible Cultural Heritage of Humanity was held ​on April 1 at the Phu Giay worshipping complex in the northern province of Nam Dinh. 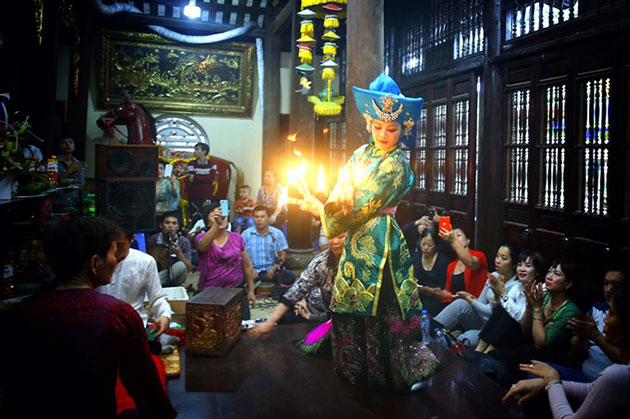 Practising Mother Goddesses worship, which is is based on an ancient system of beliefs in the incarnation of various deities channeled through mediums and believed to provide good health and prosperity (Photo: VNA)

The worship is based on an ancient system of beliefs in the incarnation of various deities channeled through mediums and believed to provide good health and prosperity.

The ceremony showcased rites and art performances honouring the unique values of the Mother Goddesses cultural and historical tradition.

Nam Dinh is considered the largest pilgrimage centre for those who practise Mother Goddesses worship, with 287 temples and vestiges relating to the beliefs across the province.

The provincial Department of Culture, Sports and Tourism has prepared a plan to promote the beliefs widely in order to provide a more thorough understandings of the heritage, in association with promoting the image of the province, which in turn will generate more opportunities for local tourism and socio-economic development.

Speaking at the ceremony, Minister Thien pledged Vietnam’s commitment to preserve the heritage after it officially received the recognition of the UNESCO.

The highlight of the programme will be activities to improve awareness, especially of the youth, in preserving and promoting the Mother Goddesses beliefs.

The practice meets belief-related needs by people in their daily life and has been closely associated with historical and cultural figures, such as Lieu Hanh (referred to as the Mother of the World), as well as other spirits considered to be legendary national heroes.

Vietnam submitted the dossier on the Practices Related to the Vietnamese Beliefs in the Mother Goddesses of Three Realms for UNESCO recognition in 2015, but the consideration process was delayed until the end of last year.