The Ministry of Transport has asked seven cities and provinces to halt the operation of double-decker buses, the first of their kind that began their trial runs early this month. 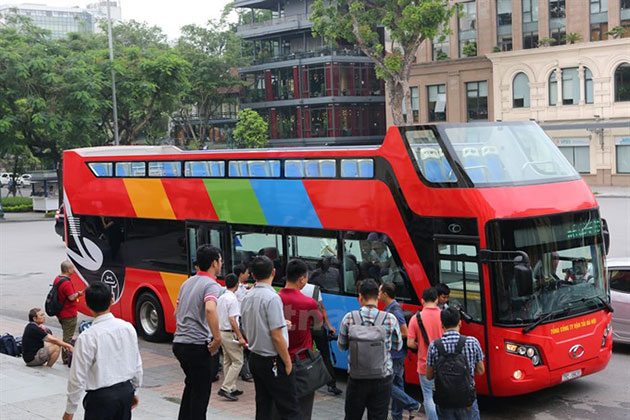 Local and international tourists get on the double-decker bus in Hanoi (Photo: VNA)

The ministry will announce a new plan for the buses after it receives guidelines from Prime Minister Nguyen Xuan Phuc.

The buses can accommodate up to 45 passengers, and would take them to the airport and various tourist spots. As scheduled, about 10 buses were to be put into operation in July. The trial would last for five years.

Based on this plan, the ministry submitted documents to relevant ministries and sectors so as to run these buses.

However, in late March, the ministry announced a draft decree on the pilot plan of carrying people in passenger buses to boost tourism in these cities and provinces.

The decree received many opinions from concerned ministries and the local authorities of these localities.

To avoid overlapping the operation of public means of transport for tourists, and ensure the traffic flow in these localities, the ministry has now decided to halt the operation of double-decker buses until it receives guidelines from the Government./.