The 2015 Mekong Delta Green Tourism Week in Can Tho province was rounded off on July 3 with more than 350,000 visitors recorded throughout the week. 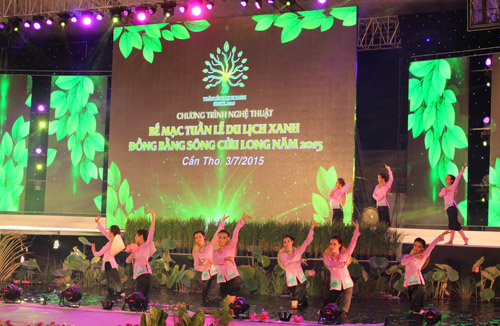 The event featured a tourism-trade fair showcasing 1,030 stalls run by state agencies and businesses nationwide. Interestingly, the fair broke a Vietnam’s record with a super hotpot that can serve 2,000 people.

Another highlight of the week was a conference promoting investment in the local sustainable industry. It presented 62 tourism projects and called for a total funding of approximately VND11.86 trillion (US$546.5 million). At the meeting, the State Bank of Vietnam inked credit contracts worth more than VND980 billion (US$45.2 million) for two tourism projects in Phu Quoc Island of Kien Giang province and another project in Phong Dien district of Can Tho.

At the closing ceremony, the organising board hounoured 15 groups and seven individuals that had contributed significantly to the final success.

Comments, feedback and proposals garnered from the event will be processed before submitting to the Prime Minister for his consideration towards the issue of policies on developing green tourism in the region.