Farmers in the Mekong Delta have planted rice on 497,000 hectares in the Autumn-Winter crop, 24,000 hectares more from the same period last year. 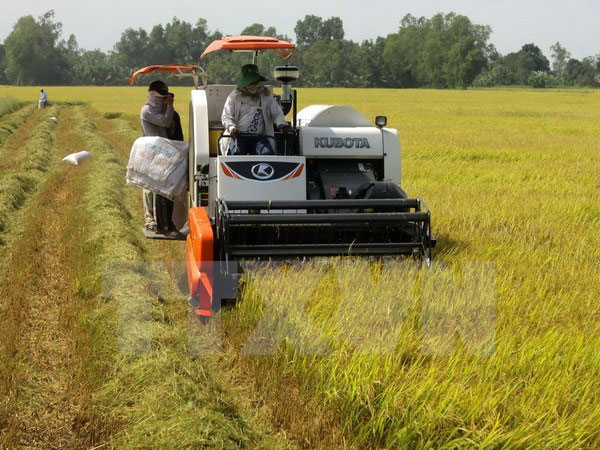 A farmer mans a combine harvester on a rice field (Photo: VNA)

Dong Thap Province accounts for over 131,000 hectares of rice, followed by Kien Giang with 90,000 hectares.

As of mid August, over 1.36 million hectares across the country were planted with rice for the traditional wet season crop, or 99.7 percent of the same period last year. Most of the area is in the north, with 1.14 million hectares, half of which are in the Red River delta.

The fall in wet season rice crop acreage is attributed to unfavourable weather, with floods and storms having damaged nearly 15,000 hectares.

Meanwhile, the acreage of Summer-Autumn rice crop this year remained the same as last year, at over 2 million hectares, with more than 1.66 million hectares in the Mekong Delta.

Southern provinces have harvested around 980,000 ha of this rice crop, with an average yield of 5.7 tonnes per hectare.

The acreage under other food crops such as sweet potato, cassava and maize exceeded 1.5 million hectares nationwide, a year-on-year drop of 2.5 percent.

The agricultural sector urged farmers in the north to replace flood-damaged rice areas with other food crops./.

Efforts made to develop livestock

The soldier send off in Bình Thủy district

Vĩnh Thạnh completed the soldier send off target in 2021

Cần Thơ sent off 1,700 young men to the armed forces and…