Seventeen Vietnamese officials, volunteer experts and soldiers who had performed international missions in Laos were awarded with the orders and medals of Laos at a ceremony held in the northern mountainous province of Son La on November 25. 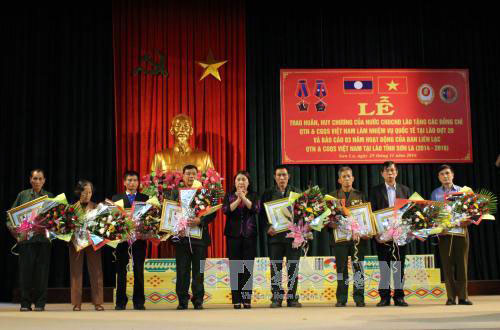 Speaking at the event, Vice Chairwoman of the provincial People’s Committee Trang Thi Xuan said nearly 10,000 ethnic people in Son La joined international missions in Laos and thousands of them dedicated their lives to the Lao national liberation cause.

The glorious victory of Laos is a pride and historic milestone in bilateral relations, she said.

Over the past years, the provincial liaison board for the former Vietnamese volunteer soldiers and experts in Laos has made practical contributions to promoting solidarity and mutual support between the two Parties, countries and peoples.

In the near future, the provincial Party committee, authorities and people will continue popularising the two Parties and States’ policies to foster bilateral friendship and special solidarity, Xuan said./.