The 2016 Lam Kinh Festival, commemorating the 598th anniversary of the Lam Son Uprising and the 583rd death anniversary of King Le Thai To, opened on September 22 at the Lam Kinh historical site in Tho Xuan district, Thanh Hoa province. 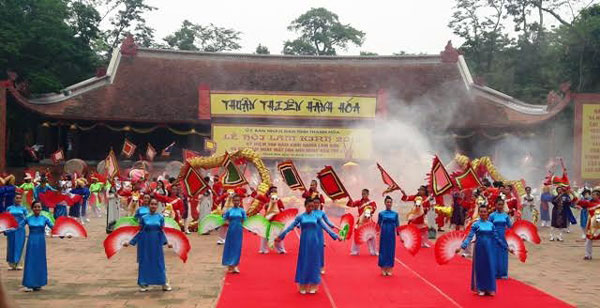 A performance at the festival

The annual festival honours national hero Le Loi, who is also known as Le Thai To, the first king of the Vietnamese Le dynasty, as well as the heroes and people who joined the Lam Son Uprising against the Chinese Ming invaders to gain national independence.

The festival features traditional rituals that represent historical events during the Le dynasty such as a liturgy and a palanquin procession from the Le Thai To Temple to Lam Kinh Temple.

In addition to the traditional ceremony, art performances were organised, which portrayed important historical events in the ten-year resistance war against the Ming invaders, including the ceremony when Le Loi and his soldiers took their fighting vows, Le Loi’s battles and his coronation.

The festival also featured a series of other art performances and folk games.

On the occasion, Thanh Hoa provincial Centre for Film Distribution and Projection will introduce a wide variety of documentaries on the Lam Kinh historical site, the Lam Son Uprising and well-known figures of Vietnam to local people.

The province also organised incense offering ceremonies at Le Thai To Temple in Xuan Lam commune; the Le Thai To Tomb and the Lam Kinh Temples in Tho Xuan district; the Le Lai Temple in Kien Tho commune, Ngoc Lac district; and the Le Loi monument in Thanh Hoa city.

Lam Kinh historical relic, about 50 km west of the Thanh Hoa City, is regarded as the sacred homeland of the national hero Le Loi, the leader of the resounding Lam Son Uprising in the 15th century against the Chinese Ming invaders to bring about independence for the Viet people.

Constructed in 1433, right after the death of King Le Thai To, with numerous monuments and mausoleums, Lam Kinh has been considered the second capital of the Le Dynasty, beside Thang Long Citadel./.

Cần Thơ prepares for the incense tribute ceremony to Hùng…

The Economic – Budgetary affairs board verified…

Traveling around Cần Thơ: A year of much effort exerted by…