The Electricity of Vietnam (EVN) held a ceremony in the northwestern mountainous province of Lai Chau on December 20 to inaugurate the Lai Chau hydropower plant. 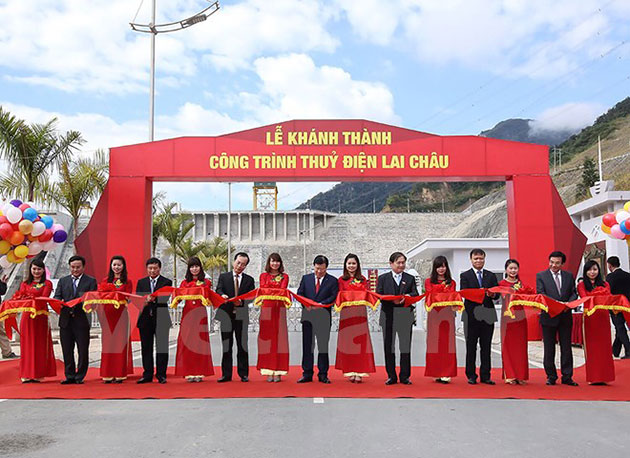 At the inaugural ceremony (Photo: VNA)

Deputy Prime Minister Trinh Dinh Dung hailed the EVN for completing the project one year earlier than the schedule set by the National Assembly.

He required the EVN to ensure efficiency and absolute safety in the management and operation of the plant.

The Deputy PM also requested authorities in Lai Chau and Dien Bien to coordinate with the EVN to help people displaced by the power plant’s construction secure long-term livelihood and ensure proper living conditions for them.

He noted that Vietnam will need additional 5,000-7,000 MW of electricity in the next 10-20 years, so the EVN and the Ministry of Industry and Trade should continue to invest in developing the power generation and transmission systems to serve the country’s socio-economic development targets.

Director of the EVN Dang Hoang An said the Lai Chau hydro power plant has three turbines with a combined capacity of 1,200 MW and a total investment of 35.7 trillion VND (1.7 billion USD).

It is the third large-scale hydro power plant built on Da River, after Son La and Hoa Binh.

The plant is expected to supply nearly 4.7 billion kWh of electricity each year while regulating water flow to prevent flood and provide water in the dry season for the northern delta region.

Its first turbine was put into operation in December 2015 while the two others became operational in June and November 2016, respectively./.