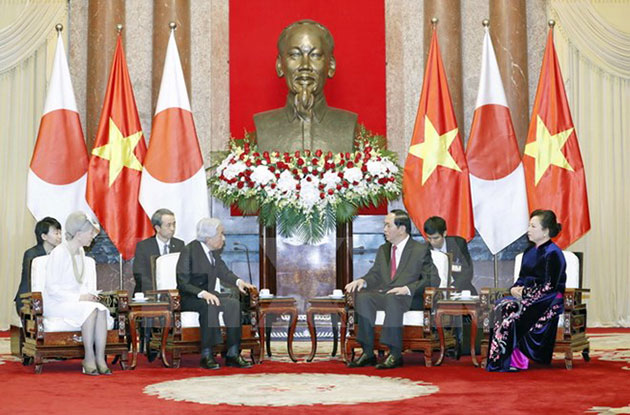 During their stay, the royal couple had a meeting with President Tran Dai Quang and enjoyed a banquet hosted by the State leader and his spouse, while meeting Prime Minister Nguyen Xuan Phuc and his wife, and National Assembly Chairwoman Nguyen Thi Kim Ngan.

The Japanese Emperor and Empress also laid a wreath and paid tribute to President Ho Chi Minh at his mausoleum in Hanoi.

At the meetings, the two sides agreed that the Japanese Emperor and Empress’ visit has a historical significance to the bilateral relations.

They shared belief that it will contribute to fostering mutual trust, understanding as well as sentiments that people of the two countries give to each other, thus further expanding the extensive strategic partnership between Vietnam and Japan in the future.

They concurred that the relationship between Vietnam and Japan is on the most flourishing stage in the history.

Next year, the two sides will cerebrate the 45th anniversary of the diplomatic ties, they noted, stressing that the historical exchange as well as similarities in culture between the two countries such as wet rice cultivation, sericulture and weaving as well as love for peace, which should be preserved and further promoted.

Both sides agreed on the need for all countries across the globe to pay more attention to the protection of environment for ensuring health and living conditions of all people, while sharing their common perspectives on the significance of education to national development.

They also hosted an exchange with Japanese alumni and the Japanese community in Vietnam, as well as the families of Japanese veterans living in Vietnam.

They also visited the Museum of Biology of the Vietnam National University in Hanoi.

While staying in the central province of Thua Thien-Hue, they enjoyed the Hue court music at Duyet Thi Duong Theatre, and visited the Imperial City of Hue and the commemorative area of patriot Phan Boi Chau./.