Prime Minister Nguyen Xuan Phuc has expressed his hope that Japan will become the largest investor of Vietnam in the near future. 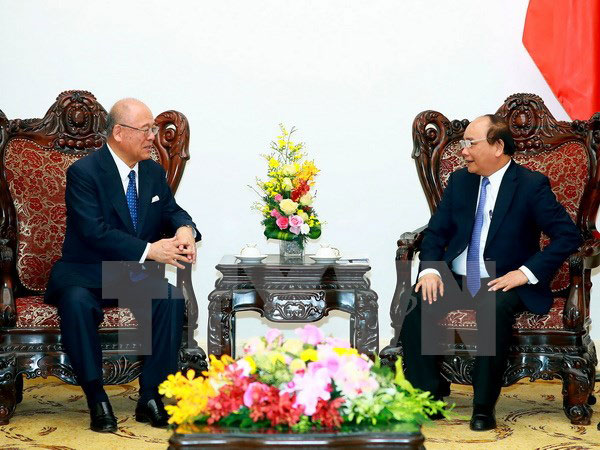 At a reception for Tsutomu Takebe, Special Advisor to the Japan-Vietnam Friendship Parliamentary Alliance and President & CEO of Nidec Corporation Shigenobu Nagamori in Hanoi on March 16, the PM said he is pleased with the fruitfully developing extensive strategic partnership between the two countries in all spheres.

He affirmed that his government will work to ensure the success of Japanese enterprises, including Nidec, in Vietnam.

Vietnam is calling on hi-tech firms from Japan to invest in Hanoi-based Hoa Lac Hi-tech Park, the Government leader said, vowing to provide them with the best incentives.

The Vietnamese Government pays special heed to developing the support industry and will create optimal conditions for Japanese businesses operating in this field, affirmed the PM.

Lauding the Vietnam-Japan University project, PM Phuc said the government will approve the school’s regulations as soon as possible in order to facilitate its operation.

He said he believes that the university will become one of the most prestigious universities in Vietnam, proving high-quality human resources for the country’s development.

For his part, Takebe stressed the role of support industry as a foundation for major firms to invest in. He promised to call on Japanese businesses to increase investment in this field in Vietnam.

Meanwhile, S. Nagamori noted his wish that the Vietnamese Government will create favourable conditions for his corporation to expand investment in the capital city of Hanoi./.