The regulation of adding iodine should be applied to all food, the Vietnam Dairy Association suggested in a dialogue with the Ministry of Health earlier this week. 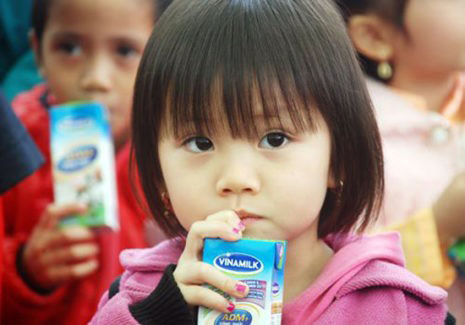 Last week, the government issued decree 09/2016/ND-CP to introduce iodine, iron, zinc and vitamin A as compulsory elements that need to be included in Vietnamese food.

The decree on food fortification, which took effect from March 15 this year, regulates that the four micronutrients should meet national technical standards and regulations on food safety.

Salt fortified with iodine, iron and zinc must be added to wheat flour, while vegetable oil that contains soybean oil, coconut oil, canola oil or peanut oil is required to have vitamin A – excluding vegetable oil used in industrial food processing, according to the decree.

In the meeting, which was attended by representatives for the Government Office, food processing businesses, the World Health Organisation – Vietnam (WHO), UNICEF, and scientists, Tran Quang Trung, the association’s President, raised his concern that the regulation on adding iodine to food will cause difficulties for milk production businesses.

“Iodine is an oxidizable substance and is changeable during food processing. So it will change the colour and smell of milk products”, said Trung.

“This means that dairy businesses will suffer”, he said.

Therefore, the Vietnam Dairy Association recommended that the iodine supplement should be regulated to seasoning products only.

Meanwhile, President of the Vietnam Association of Food Science and Technology Phan Thi Kim said many studies showed that each kind of food contains different levels of iodine, so different processing and preservation methods will change the iodine levels.

Iodine could change the colour and smell of foods, which is important to customers, Kim said.

“We thought that the addition of iodine should be regulated for specific kinds of food.

Businesses will face difficulties if the regulation was applied across the board”, she said.

For example, salt for direct use must be fortified with iodine, but adding iodine to salt for food processing will need the Ministry of Health’s detailed instructions, she said.

Meanwhile, Ministry of Health, WHO and UNICEF representatives affirmed the importance of iodine for people’s health, especially with the lack of micro-nutrition in Vietnam.

Nguyen Huy Quang from the Ministry of Health, said the regulation on adding iodine to salt for food processing is necessary.

According to Quang, thanks to the implementation of the National Programme on Iodine Deficiency Disorders Control from 1994 to 2005, the rate of children aged 8 to 10 afflicted with Basedow’s disease dropped dramatically, while the iodine level across all Vietnamese people reached WHO standards.

However, after the year 2005, when the use of iodine salt became optional, the rate of children with Basedow’s disease increased to 9.8 percent, Quang said.

This has become a concern and requires intervention, as recommended by UNICEF, he told the meeting.

“This was the reason behind the decree. The Ministry of Health has carried out several meetings to collect opinions from related businesses”, he said.

Recently, the WHO recommended supplementing micro-nutrition in daily meals and food processing as an effective and economical measure which is used in more than 100 countries all over the world.

The WHO representative told the meeting that a recent study showed that the changes in colour and smell of food processed with iodised salt were negligible.

Dr. Friday Nwaigwe, UNICEF Vietnam’s Head of Child Survival and Development, affirmed the need of fortifying iodine in food in Vietnam to ensure physical and mental health for Vietnamese children.

In many nations, using iodised salt in food processing faces obstacles like in Vietnam, and the policy requires the support from the business community, he said.

In the meeting, Deputy Prime Minister Vu Duc Dam asked the Ministry of Health to give detailed instructions to dairy and food processing businesses about using iodised salts./.