Indonesia to return over 200 Vietnamese fishermen

Indonesia will repatriate over 200 Vietnamese fishermen who were arrested for fishing in Indonesia’s seas next week. 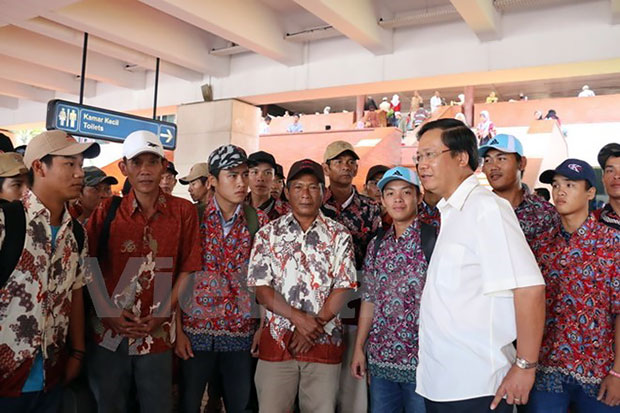 Indonesian Minister of Maritime Affairs and Fisheries Susi Pudjiastuti met with Vietnamese Ambassador to Indonesia in Jakarta on September 8 on preparations for the repatriation, which will be conducted by sea transport for the first time.

The Indonesian Minister said the return of fishermen was the result of the active cooperation between the two nations, saying that the two nations will conduct a joint patrol on their border at sea on the occasion of the repatriation.

Minister Susi also underlined the potential of Vietnam for aquaculture and seafood processing, and urged localities in Natuna to foster cooperation with Vietnamese enterprises in the field.

She expressed her hope that the two nations will continue working together to return the remaining Vietnamese fishermen detained in Indonesia to their home country.

For his part, Ambassador Hoang Tuan Anh expressed his thanks to the Government of Indonesia and the Minister for their active contribution to the agreement.

Vietnam has taken numerous measures to prevent its fishermen from violating Indonesia’s waters, he said, adding that the efforts were hampered by fishermen’s poor awareness of law and disadvantaged circumstances.

Indonesia said it is currently detaining around 312 Vietnamese fishermen./.