Hundreds of foreigners apply for e-visas

As many as 490 foreigners have registered for electronic visas to enter Vietnam, 210 of whom have been issued with their visas, after the first week of the e-visa pilot scheme, the Ministry of Public Security’s Department of Immigration has said. 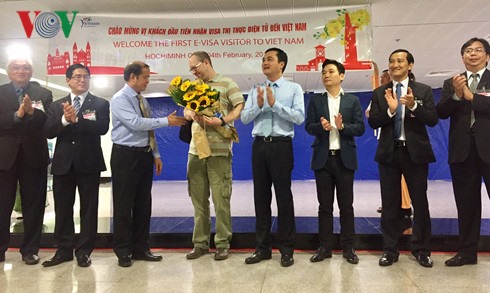 The welcome ceremony for the first e-visa visitor to Vietnam. (Source: vov.vn)

Foreigners could apply for visas and pay fees through the website. The process takes only three days for an e-visa valid for 30 days without requiring letters of guarantee or invitation.

The first foreigner to receive an e-visa was a British tourist. Britain was among the countries subject to visa exemption for stays of less than 15 days in Vietnam, he added.

Vien said the move was an effort by the Government to boost socio-economic development, making it more convenient for foreigners to enter the country without being guaranteed by certain organisations or individuals.

It also aimed to contribute to the development of the tourism industry, which hopes to attract between 15 and 20 million tourists in the next two years.

Foreigners can apply for e-visas via https://www.immigration.gov.vn.

Currently, about 30 nations issue e-visas. The Vietnamese procedures seem to be simpler than most other nations, as foreigners did not have to be fingerprinted, photographed, or interviewed, Vien said.

“E-visas can be accepted at most international airports and 28 border gates in Vietnam,” he said.

In reply to questions on the management of e-visa holders, Vien said the issuance of e-visas only simplifies procedures for foreigners. The process of approving visas remained the same as before.

So far, the Vietnamese Government has signed more than 80 agreements on visa exemption for 13 nations, including Russia, Denmark, the Republic of Korea, Japan, Norway, Sweden, Finland, Belarus, Britain, France, Spain and Italy./.