Hundreds of stroke victims hospitalised in the Da Nang General Hospital over the past three years were saved by a special task force for stroke victims, the Tuoi Tre (Youth) Newspaper reported. 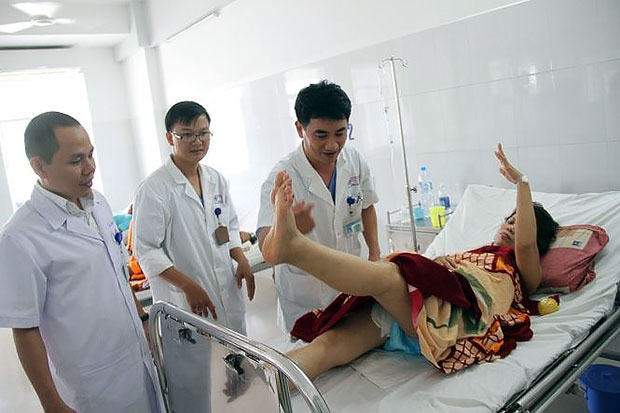 The task force examines anyone arriving at the hospital with symptoms of a stroke, and gives first aid.

The patient is then classified as an “urgent case”, enabling a speeded up administrative process so doctors can race to save the patient’s life, hospital director Dr. Tran Ngoc Thanh told the newspaper.

Experience shows that the first three hours after a stroke are the crucial ones for getting life-saving treatment, but most victims arrive at the hospital after experiencing the symptoms, such as numbness, difficulty speaking and vertigo, he added.

According to the hospital director, the task force was formed three years ago and consists of 10 doctors.

“The whole process of diagnosing, giving first aid, conducting tests and deciding on proper treatment will take about 40-60 minutes,” said doctor Duong Quang Hai, one of the team members.

If they are treated in time, “most stroke patients resume normal lives after one month of treatment in the hospital,” Hai said.

“We are always racing against time because every minute that passes reduces the patient’s chances of survival,” he said.

“Before, about 70-80 percent of patients with a stroke caused by a blood clot in brain vessels would die or remain disabled,” said doctor Le Duc Nhan.

“Since earlier this year, the hospital has a new method of removing blood clots from the brain vessels,” Nhan said, “giving many patients a chance of survival.”

According to the Vietnam Stroke Association, about 200,000 people in Vietnam suffer strokes each year.

Half die, a decrease of about 20 percent compared with 10 years ago.

Experts say stroke treatment in the country is difficult due to limited hospital infrastructure and lack of knowledge on the part of victims.

In fact, about 90 percent of patients suffer after effects, the severity of which depends on when they were hospitalised and how they were treated.

Cần Thơ Department of Health reviewed its work in 2021