Hollywood film director Jordan Vogt-Roberts said he is honoured to be Vietnam’s tourism ambassador and will do his utmost to help Vietnamese tourism take off. 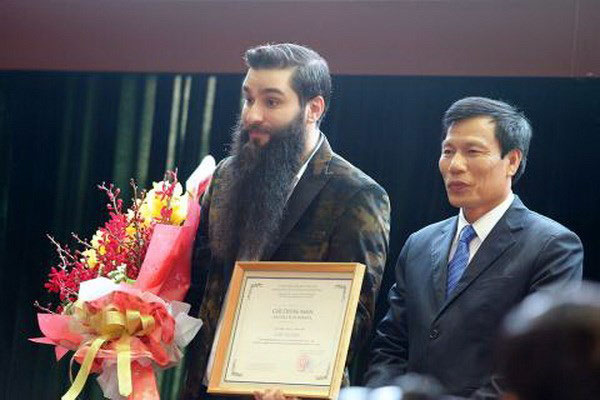 The director made the statement at a ceremony in Hanoi on March 3 during which Minister of Culture, Sports and Tourism Nguyen Ngoc Thien presented a decision appointing him as the tourism ambassador of Vietnam for the 2017-2020.

With the appointment, Jordan Vogt-Roberts has become the first foreign director holding this position.

Jordan Vogt-Roberts, 33, is an emerging director in the US and Kong: Skull Island is his third film. He was the first person who explores the whole Son Doong Cave, the world’s largest cave.

Kong: Skull Island tells the story of a group of explorers who go in search of the birthplace of the lord of giant apes. It was shot in Ha Long Bay in Quang Ninh, Van Long Natural Reserve and Trang An Complex in Ninh Binh, and the Phong Nha-Ke Bang National Park in Quang Binh.

The blockbuster set a new record in box office revenues in Vietnam after snagging 18.2 billion VND (798,200 USD) from the opening day on March 10 and early screenings on March 9 night, becoming the film with the biggest opening of all time in the country./.

1,000 delicious dishes of the past and the present