Doctors in Ho Chi Minh City have warned about the spread of contagious diseases especially chickenpox due to favourable weather conditions and parents’ negligence. 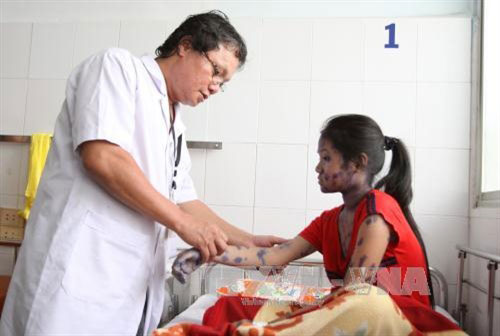 According to Truong Huu Khanh, head of the infection and neurology ward at Paediatrics Hospital 1, the chickenpox season in the south usually begins in February and lasts until June, peaking in May and June.

The department has treated 24 child patients of chickenpox since early January, he said, adding that most chickenpox cases are not serious and can be treated at home.

The doctor noted a worrying trend of more chickenpox infections among adults patients, aged between 25-30.

He recommended children be vaccinated to prevent the disease.

Chickenpox is caused by the varicella zoster virus and characterised by skin eruptions.

The first symptom of chickenpox is light fever, with a red rash appearing on face after several days.

Children over one year old could be vaccinated. Children over 13 years old received a second injection after six weeks./.