A ceremony was held in the central province of Ha Tinh on September 25 to receive a certificate recognising the Woodblocks of Phuc Giang School as a documentary heritage by UNESCO’s Memory of the World Committee for Asia and the Pacific (MOWCAP). 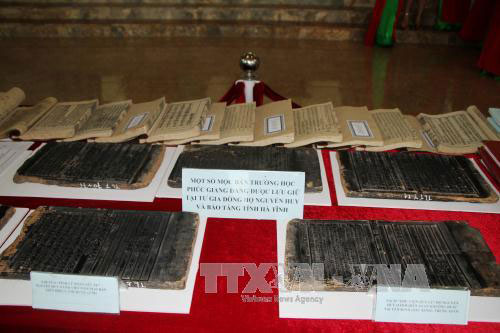 The Woodblocks of Phuc Giang School on display at the certificate-awarding ceremony. (Source: VNA)

The woodblocks were recognised at the 7 th meeting of the MOWCAP held in the central province of Thua Thien-Hue in May this year.

Speaking at the ceremony, Suzan Vize, acting Chief of the UNESCO Office in Vietnam, expressed her admiration at creativity hidden in the woodblocks and confirmed the uniqueness of the heritage owned by a family in Vietnam.

Ambassador Pham Sanh Chau, Secretary-General of the Vietnam National Commission for UNESCO, said the recognition once again confirmed the studious tradition of Ha Tinh people in particular and Vietnamese in general.

The ambassador also appreciated efforts made by Ha Tinh authorities and the Nguyen Huy family in preserving and making dossiers for the heritage.

He urged the province to pay more attention to conserving and promoting the woodblocks in Vietnam, the region and the world at large.

The Phuc Giang School’s woodblocks were created by scholars of the Nguyen Huy family in Ha Tinh province in the 18th century.

The blocks were used to print text books for the Phuc Giang School, which was located in the old Truong Luu village, Can Loc district.

The total set used to number 2,000 blocks, but many have been damaged or destroyed over time.

The blocks are rare, unique and contain valuable content.

The two-century-year-old set of woodblocks forms the heritage of the Nguyen Huy family that has been preserved by the family’s descendants, he noted.

They are the only ancient woodblocks created by a family for education preserved today in Vietnam.

He also founded Phuc Giang library with thousands of books that he and his family collected over many years.

Thanks to Oanh’s deep knowledge, his teaching methods and the rich library, the school attracted a great number of students from different regions.

The contents of the woodblocks were composed by five cultural scholars of the Nguyen Huy family, who were teachers at the Quoc Tu Giam University, the country’s first university.

Nguyen Huy My, from the 16th generation of the Nguyen Huy family, said the woodblocks were carved using traditional techniques, and with words written in Chinese and Nom (a classical vernacular script of the Vietnamese language).

Each woodblock, which is 20cm wide, 2cm thick and 30cm long is made of precious thi tree wood.

The Phuc Giang School’s woodblocks appeared before the woodblocks of the Nguyen Dynasty and those of Vinh Nghiem Pagoda in Bac Giang province.

What make the Phuc Giang woodblocks special is that they belong to a family and they are still well preserved. The museum and the family Nguyen Huy have thought of solutions and materials to preserve the woodblocks.

The other five Vietnamese items recognised in the Memory of the World Regional Register for Asia and Pacific list are Royal Literature on Hue Royal Architecture, the Nguyen Dynasty’s wooden blocks and the royal records, the Van Mieu stone stele and the Vinh Nghiem Pagoda woodblocks./.