The People’s Committee of the northern mountainous province of Ha Giang has approved the “Culture-Tourism Village of the Mong Ethnic Group” project in Pa Vi Ha hamlet, Pa Vi commune, Meo Vac district in an effort to preserve and promote the traditional cultural values of the ethnic group and attract more tourists. 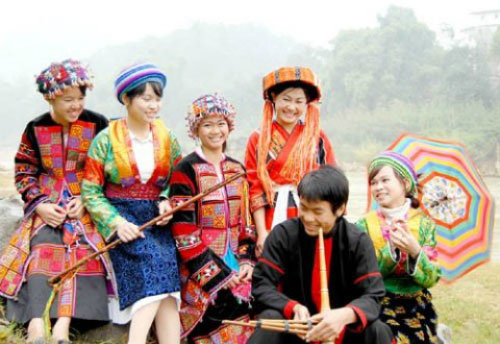 Covering a 4.6ha area at the foot of Ma Pi Leng Pass on a highway connecting Dong Van and Meo Vac districts, the village will be operated under a community-based tourism service cooperative model with the engagement of 30 local households.

It will be built in the shape of three peach blossoms, each is made up of 10 clay houses in the Mong ethnic group’s style.

The project has received warm response from local authorities and residents.

Artisan Ly Mi Na, 63, said he is happy when the Mong people have such a village and even happier if he can live and engage in tourism services there.

He expressed his hope that the village, once operational, will promote the cultural features of the Mong ethnic people and create a venue for them to perform traditional songs and dances, and play folk games.

Locals will have a chance to develop traditional crafts such as weaving, thus improving their living conditions, he added.

According to Ma Quoc Truong, Vice Chairman of the People’s Committee of Meo Vac district, Pha Vi Ha hamlet is the most suitable location for the village as all of its residents are Mong ethnic minorities.

The village not only serves tourists but also helps Mong people themselves to understand more about their culture, he said.

Meo Vac district strives to finish three to five houses in the village by the end of this year, and 25-27 houses and supporting facilities by 2017.

The village is expected to be open in the first quarter of 2018 as a highlight of Meo Vac’s tourism, attracting about 1,500 domestic and foreign tourists every year./.