Two people died and at least two others went missing in a mountain landslide that happened on early November 20 in Nha Trang city, the south central province of Khanh Hoa. 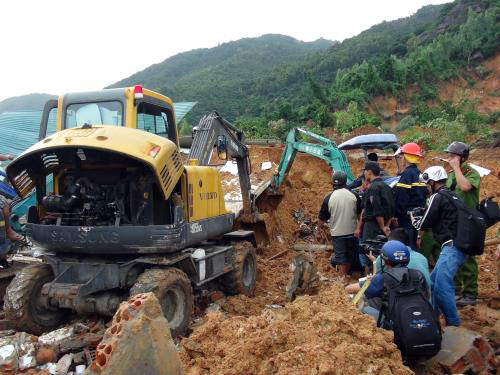 Rescuers search for the victims in the landslide (Photo: VNA)

As of 9 a.m., rescuers retrieved the bodies of two victims from the scene in Phuoc Loc hamlet of Phuoc Dong commune. Six injured people were hospitalised.

Preliminary data show that about 10 houses were buried beneath soil and rocks, which also damaged five other houses.

Dang Van Vung, whose house was damaged in the incident, said within just some minutes, a huge amount of earth and rocks suddenly fell down on the residential area, making many people unable to respond.

The central region, including Khanh Hoa, has experienced incessant rains and flooding for the last few weeks./.