Bkav Corporation on May 26 launched its first made-in-Vietnam smartphone, Bphone, which in development for more than four years. 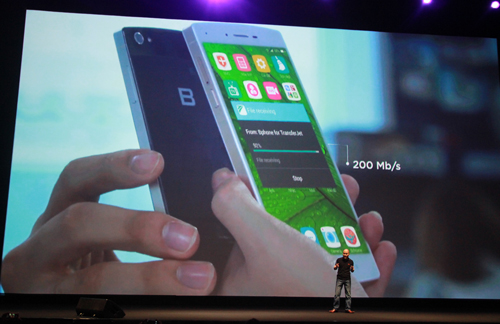 With a flat design, the phone has a quad-core Qualcomm Snapdragon 801 with a speed of up to 2.5 GHz, and RAM Sky Hynic 3GB LPDDR3, and eMMC 5.0 flash storage of Toshiba. It comes with a 5-megapixel front camera and a 13-megapixel rear camera with OmniVision sensor.

Bphone has the same technology used in global high-end smartphones. For example, it provides Fast Tracking Auto Focus that allows users to take photos and get them in focus later. According to Bkav Hardware Division’s vice president Vu Thanh Thang, there are only two smartphones equipped with this technology: Bphone and Samsung Galaxy S6 Edge.

The manufacturer also said that Bphone is one of the smartphones offering music in 24bit/192 kHz, with quality nearly equivalent to that of vinyl records.

It is said to be the first smartphone in the world to be equipped with Transfer Jet, which allows users to transmit data within short distances in super high speed.

Bkav Corporation’s Chief Executive Officer Nguyen Tu Quang noted that Transfer Jet is 500 times faster than the NFC in high-end smartphones such as US-based Apple’s iPhone 6 Plus and the Republic of Korea’s Samsung Galaxy S6 Edge.

Bkav has developed Android 5.0-based BOS operating system and BChrome web browser for their phones. The phone has other functions such as video sharing Blive and health software.

The phone is also equipped with Bkav Mobile Security, Firewall, and Anti-Thief software to protect it from malware. The phone data will be stored and synchronized on BDrive cloud platform.

“We have entered the [phone manufacturing] field after other companies. Therefore, for brand recognition, we have to make products better than theirs,” the CEO remarked, adding that a phone should be beautiful, sophisticated, and strong,” Quang said.

“The Vietnamese people always wished that Viet Nam will produce the best smartphone in the world. Millions of Vietnamese are using high-class, imported smartphones… Now, we have made it. Bphone is for you and for Vietnam.”