The 6th Vietnam Culture Festival took place in Seoul, the Republic of Korea (RoK) on October 16, offering a chance for locals to understand more about the Vietnamese culture. 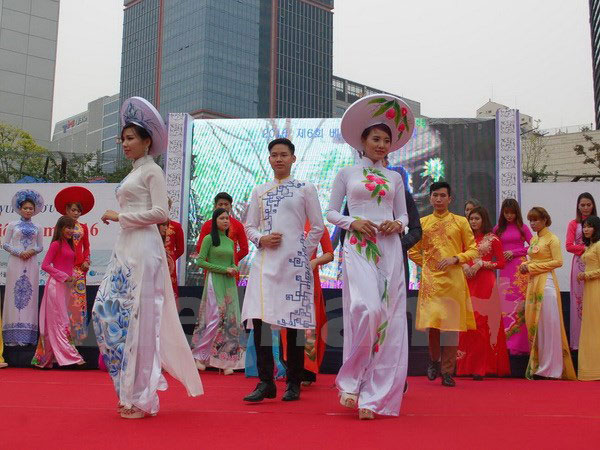 The event, which was organised by the Vietnamese Embassy, the Vietnamese Association in the RoK, the Korea-Vietnam Cultural Exchange Association (KOVECA), and the Ministry of Labour, Invalids and Social Affairs (MoLISA), was part of activities to celebrate the 24th anniversary of diplomatic ties between the two countries.

In his opening speech, President of the Vietnamese Association in the RoK Tran Hai Linh highlighted the fruitful development of the Vietnam-RoK relations over the last 24 years, expressing his belief that with efforts made by nearly 150,000 Vietnamese expats in the RoK, the ties will further develop in the future.

Ambassador Pham Huu Chi spoke highly of the community’s activities to help disadvantaged people in the homeland and safeguard the national sea and island sovereignty.

He thanked the RoK Government for creating conditions for Vietnamese living, working and studying in the country.

He said Vietnamese guest workers in the RoK have applied experience and skills they learned from the country in the homeland after they came back home.

He also called on Vietnamese labourers, who are illegally working in the RoK, to voluntarily return home so that they can enjoy incentives offered by both the Vietnamese and RoK Governments.

KOVECA President Lee Nam-ki pledged to work with relevant agencies to support oversea Vietnamese in integrating into the host country.

On the occasion, centres for supporting foreign labourers in the RoK, outstanding Korean employers and Vietnamese employees were presented with certificates of merit for their contributions to promoting labour links between the two nations./.